Barry’s Blog # 2: The Secret of their Appeal

We are the innocent ones. Sure, we all love to make fun of Sarah Palin and Christine O’Donnell. After we finish laughing at the latest outrageous statement or revelation, we usually comment on how inaccurate or even downright ignorant they are, and we wonder how anyone can believe them.

This is true but of little value to progressive people , for several reasons. First of all, writes Frank Rich,  O’Donnell plays a very important role in diverting attention from the fact that very wealthy interests have been bankrolling the Tea Party from the start. It also gives the Republicans the image that they are supporting working-class and middle-class Americans.

But I, as always, am interested in the mythic issues. We innocently hope that if the Tea Partiers learned the truth, the facts, they would stop supporting such people. Perhaps some would change their minds, but I suggest that most wouldn’t. There is a deeper, mythic truth here: they support Palin and O’Donnell precisely because these politicians appear to be such idiots — or such scoundrels.

It isn’t their arguments which are so popular; it is their vocalizing of a very old aspect of the Myth of American Innocence: anti-intellectualism. This stems from attitudes, images and values which developed  in the eighteenth century that appeared to divide the effete, condescending, stuffy, superior, wealthy, wine-sipping, “know-it-all” intellectuals of the established east coast cities from the hard-working, adventurous, profane, whiskey-drinking (yet real Christian), Indian-fighting farmers and hunters who lived along the frontier and blazed their way across the continent. Indeed, such people formed the “Know-Nothing” party, originally (and without irony) known as the “Native American Party,” 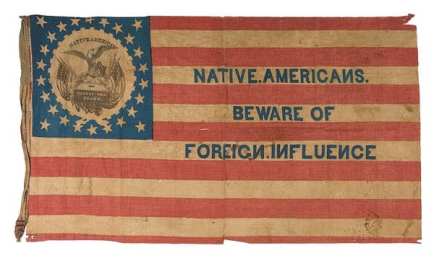 whose primary purpose was to demonize the immigrants who were arriving on the east coast and populating the cities.

Eight generations later, following the example of George Wallace, the Republican party managed to convince most working-class white men that the Democrats represented the “establishment,” while they, the Republicans, were outsiders, rebels against that establishment. They could do so because they had learned (much better than the Democrats) the basic vocabulary of American myth. And they knew how to manipulate the mythology of white privilege (more on that in my next blog).

Every time Palin or O’Donnell makes a silly gaffe or reveals another insane family secret, their fans approve! Why, because the fans see themselves in them; they see politicians who act (and sound) just like them. Remember how George Bush (and before him, Ronald Reagan) would smirk like a teenager when someone confronted their political clichés with the truth? They simply didn’t care that they had been proven wrong. Every time they were contradicted, their popularity increased, because, like the holy fool Parcifal, they had tweaked the noses of the “establishment.”

The image is the key to national denial. Their supporters get more nourishment, apparently, from the image than from the truth. And that’s a truth that, for the time being, we must accept.

This entry was posted in Uncategorized and tagged Barry's Blog # 2: The Secret of their Appeal. Bookmark the permalink.

1 Response to Barry’s Blog # 2: The Secret of their Appeal