Last week, like ten years ago, one of the most common themes that emerged in the media was the “loss of innocence.” Do you remember those days?

Do you remember how, all through day one, TV commentators and politicians repeatedly assured viewers that things were under control – despite the carnage on the screen? Absolutely everyone declared America’s goodness and shock that we had been attacked for no reason.

On day two, September 12th, commentators began to offer more nuanced interpretations. CNN asked prominent Rabbi Marc Gelman if America would be changed by this event. He responded, “Yes, we have lost our innocence. We now know there is radical evil in the world.”

Evil was “out there,” and Americans, mysteriously, had never heard about it.

CNN then interviewed Psychologist Robert Butterworth, who mentioned that his son had asked him, “Daddy, why do they hate us so?” Staring mutely and miserably at the camera for several seconds, he revealed that he really didn’t know, and he clearly assumed that his viewers didn’t either.

And yet, such lamentations had certainly followed the Oklahoma City bombing, 1993’s World Trade Center bombing, the TWA airliner bombing, the bombings of the destroyer Cole and Lebanon barracks in 1983, or any of the dozens of mass shooting by “lone gunmen.”

On September 13th, Clear Channel, owner of 1,200 radio stations, banned the airplay of 150 songs, including “Peace Train” and “Imagine.” On the 14th, President Bush verbalized the consensus of innocence betrayed: “… (although) in some Islamic countries there is vitriolic hatred…like most Americans…I know how good we are.”

Soon, Attorney General Ashcroft would have a veil placed over the nude statue of Justice in the Great Hall of the Department of Justice, 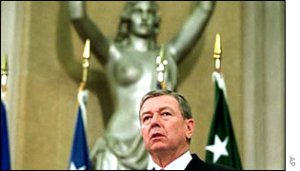 and Colin Powell would force the U.N. to veil its copy of Picasso’s great anti-war painting “Guernica” before he would announce the invasion of Iraq.

Although people commonly spoke of apocalyptic times, we should remember that apocalypse actually means “to lift the veil.” And people commonly spoke of how life had changed forever. A few, however, spoke of a magnificent opportunity. America, said Cornel West, could now understand how other nations, women and people of color have suffered; America had been “niggerized.” But, as we all know, the moment passed.

Innocence has two primary definitions. First, it means “not guilty.” Rudolf Hoess, commandant at Auschwitz, protested that he hadn’t personally murdered anyone. “Innocent” often precedes another word: “victim.” Curiously, oppressors often convince themselves that they are the innocent victims. Another Nazi, Hans Fritzsche, claimed, “I became guilty of the death of five million people – innocently.”

Second, to be innocent is to be uninjured, inexperienced or naïve. In American history and mythology and in the American character, innocence merges with ignorance. (The difference? I don’t know and I don’t care). The childlike innocence of old folktale heroes becomes the childish quality of people who refuse to grow up, innocently hiding parts of themselves from their own awareness.

Repression, however, always comes with a price. Myth and archetypal psychology tell us that when those repressed parts return – and they always do – they are likely to be angry.

When did you lose your innocence? Hiroshima? Vietnam? The Kennedy and King assassinations? 9/11? Hurricane Katrina? Obama? When did you lose it again? I’m not joking – If Americans by my definition live within an impenetrable cocoon, a mythology of innocence, then every time we lose our innocence, it is quickly re-veiled. If America is innocent – despite 250 years of slavery, the native genocide, Hiroshima, Viet Nam, Guantanamo and Abu Ghraib, despite our malicious intervention in literally dozens of countries – then every time we “lose” our innocence, aren’t we compelled to rebuild it? And every time we lose it again, doesn’t it feel like the first time? Not everyone, of course, has slept through history: African-American novelist Walter Mosely writes, “I have never met an African-American who was surprised by the attack on the World Trade Center.”

National myths are the stories we tell ourselves about ourselves. They organize and justify existence, reconcile the gulf between ideals and realities, link us spontaneously to the priorities of the state and prescribe our reactions when our unexamined beliefs are questioned. They continually reinforce our sense of who we are. Myths determine perception, like the lenses of a pair of glasses. They are not what we see, but what we see with. They are so obvious that they never have to be “explained.”

More than any people in history, we suffer from a queasy rootlessness at the foundation of our identity. Its source is the bedrock of unresolved grief for the massive suffering that white Europeans have inflicted on this continent.

And it assumes a deep alienation from our bodies. The influential Puritan Increase Mather wrote, “As long as we are at home in the body, we are absent from the Lord.” Since the very beginning, white Americans have projected our hatred of sexuality upon convenient scapegoats, whom we have demonized as impure, savage and unable to restrain their impulses. In another century, Carl Jung observed, “When the American opens a…door in his psychology, there is a dangerous open gap, dropping hundreds of feet… he will then be faced with an Indian or Negro shadow.”

Myth tells us that if we persist in our innocent fantasy, Life will eventually drag us out of our denial, into a literal and violent facsimile of the non-violent initiations that tribal elders once intentionally created for their young people. Rumi writes:

When school or mosque, tower or minaret get torn down,

Then dervishes can begin their community.

That any human being can become a part of the truth.

This is how the soul – and the soul of a nation – grows: by realizing that the Other is ourselves. In ancient Greek, the word “xenos,” root of xenophobia and an epithet of Dionysus, means “stranger.” But it also means “guest.” Our American mistake has been to divide the one from the other. D.H. Lawrence saw this and wrote of “a certain difficult repentance…realization of life’s mistake, and the freeing of oneself from the endless repetition of the mistake.”

But we have to start from where we are. Another poet, V.L. Schouten, writes: “Remembering now is blessing enough. Waking up groggy is still waking up.”

Antonio Machado wrote, “What was your word, Jesus? Love? Forgiveness? Affection? All your words were one word: Wakeup.”

Diane Di Prima writes: “The only war that matters is the war against the imagination.”

And when the political process is broken, perhaps all we have is the power of imagination, which Albert Einstein declared is more important than knowledge, which J.K. Rowling says “…enables us to empathize with humans whose experiences we have never shared.” We are challenged to stretch our imagination backward – past our more recent Judeo-Christian mythologies of violent redemption – before we can stretch it forward. We need to comprehend our myth of innocence, to understand the American stories we have inhabited – fully, painfully – before we can re-imagine them or tell new ones.

“Nostalgia” (Greek: “return”) refers not to another time, but to another place. Even after four centuries of white (and black) residence on this land, we tread uncomfortably – and disrespectfully – upon it. We remain exiles, uninvited guests longing to be welcomed, to call it home. It will be lengthy and painful, but the way through is by re-awakening our indigenous souls. Learning who we are, below the identifications with nation, race and brand names, will lead us to love where we are.

I’m inviting you to think mythologically. Before we can imagine real alternatives to our current madness, we simply have no alternative but to remember – and mourn – how much we have lost of our indigenous ways. This is precisely what we as a nation didn’t, and still haven’t, in the months and years after 9/11.

We must unveil an immensely old double amnesia; we’ve forgotten that we have forgotten how to live in harmony. All this will be necessary before we can begin to tell new stories, to deepen the American Dream by first awakening from it.

I suggest that only a mythic perspective can make any sense of our dilemma. America’s rulers are not ignorant; they are fully aware of our human and environmental tragedies. The fathers no longer send only the young to be sacrificed; now they offer everything to the sky-gods. Whether or not we take their religious rhetoric literally, they are deliberately (if unconsciously) provoking both personal and global apocalypse. But – again – this is how the soul of a nation grows: by choosing – consciously or not – to face what stands behind the veil.

Perhaps the entire world sensed a desperate, visceral prayer when, in June 2003, Bush, the self-appointed embodiment of American heroism and innocence, challenged the Iraqi resistance to “bring it on!” Was he not also speaking to his – and our – inner demons? And our inner guides?

Like actors in an annual religious drama, other forces are determined to help America lose that innocence. And the cycle continues. Who remains innocent in this world? What does our fascination with innocence force others to bear? How long can they bear it?  “What is madness,” asked another poet, Theodore Roethke, “but nobility of soul at odds with circumstance?”

We are challenged to painfully pursue the myth of innocence further until we re-discover our – and America’s – nobility. The way out of the myth is further into it. Cooking down the American story to its core, we will discover the most basic and fulfilling of all narratives, the story that has attracted people from all over the world for four centuries, the story of the new beginning.

Dionysus tells us and that there is still time to change, to awaken from this dream of innocence and return home. As Denise Levertov writes:

Through the midnight streets of Babylon

between the steel towers of their arsenals,

between the torture castles with no windows,

we race by barefoot, holding tight

our candles, trying to shield

hoping the rhyme’s promise was true,

that we may return

from this place of terror

home to a calm dawn and

the work we had just begun.

This entry was posted in Uncategorized and tagged Barry's Blog # 23: On the Tenth Anniversary of 9/11. Bookmark the permalink.