Barry’s Blog # 39: An Indigenous Perspective on the Welfare State

What will you be thinking next time you hear politicians debate the question of government’s responsibility to provide for the poor? Actually, you probably won’t hear such a debate, because both Obama and Romney (in 2012) and both Clinton and Trump (in 2016) in their quest for the tiny sliver of uncommitted (white) voters, have utterly ignored those Americans who are mired in desperate poverty.

I’m not talking about the “endangered middle class,” but the truly poor, the official definition of which is an annual income of $18,000 for a single parent and two children. In other words, our government has determined that a family that makes $19,000 is not poor! While the official number is forty-six million, real-world economics would suggest that perhaps eighty million Americans are truly poor. 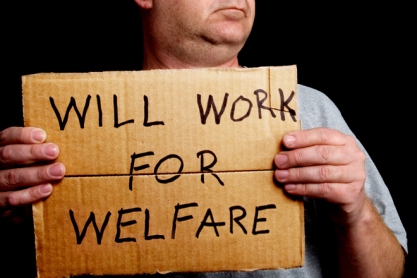 What you will hear, as you already have dozens of times, are stock messages, clichés and pontifications about waste, efficiency and the need for smaller government. You’ll hear about “welfare cheats” instead of corporate welfare or a massive military-industrial complex. As I have written before, these are coded messages that attack the “Other.” They convey the common assumption that good, white, Christian people need not concern themselves with the poor. Indeed, ever since the Reagan years, countless white males have been led to assume that government “handouts” to the poor are the source of most of our budgetary problems.

And in America, despite the tens of millions of poor whites, the media image of “poor” essentially means “people of color.” This is not hyperbole: in

experiments investigating inherent bias, when psychologists ask Americans of all classes and colors to think of a poor person, 95% of us picture a black person.

More fundamental even than our notion of white supremacy, however, our Puritan heritage of individualism continues to teach us that, just as the rich succeed without government help, pulling themselves up by their own bootstraps. So poverty too, as Jerry Falwell famously said, is one’s own fault. This is not a Republican/Democrat issue. It was Bill Clinton in 1996 who bragged about ending “welfare as we know it.”

Here is the essential American truth: our politics and our economics have a profoundly religious underpinning. Five hundred years after Martin Luther, we still hold to a thinly veiled, reframed philosophy of Calvinist predestination. At the very core of our national mythology is the idea that both the rich and the poor exist not because of a profoundly inequitable system but because of their own individual merit or lack of it.

Thus, wealth and the sense of entitlement that comes with it remains an indication of being in God’s good graces, and poverty is the sign of one’s own individual state of damnation.

And, since a quarter of American children are poor (a higher percentage than anywhere else in the developed world), this condition expresses another of our most fundamental myths, the myth of the killing of the children. Whether we send them to be sacrificed in wars or simply warehouse them in filthy schools or prisons for the crime of being born into impoverished families, they serve one primary purpose, to reinforce our own sense of innocence. The more we see “them” as flawed, violent, irrational criminals, unable and unwilling to control themselves, the more easily we can justify our own standing in the light.

I’d like to suggest a different perspective. To indigenous people, each person enters this life with unique gifts that are absolutely essential for the continued well being of the community. And the community has no greater responsibility than to welcome, protect and value each person so as to ensure that his or her gift will be given. So it is obvious to tribal people that the poor, the young, the orphaned and the sick must be looked after, because everyone’s gift is needed.

The tribal answer is clear, and this is where the old thinking differs so significantly from our own. Even the insane, even the criminal, are still potentially valuable to the community simply by being alive. Such persons are considered spiritually, if not mentally ill. And a sick person requires neither punishment nor abandonment.

In this context, consider this story from West Africa:

It all begins with a sense of being welcome in the world. People count their birthdays not from the date of birth but from the first time a child enters its mother’s mind. Before conception, or once she knows she’s pregnant, she goes into the wilderness with friends to pray until she intuits the unique song of the child to be born. She teaches it to the father-to-be, and they sing it while conceiving the child, inviting it to come from the other world and join them. Later, she sings it to the child in her womb and teaches it to the entire village.

During the birth the entire village gathers to sing the song and welcome the new spirit. At such times, Sobonfu Somé (of Burkina Faso) heard women singing other statements – oddly reversing those sung to a recently dead person in Tibet – such as “You have come to a crossroads. The light you see in front of you is the light of the village that awaits you.” The village sings the person’s unique song to him or her at every major transition – entry into school, initiation, marriage, and death – with the constant intention of reminding the person of his or her unique purpose and value to the community.

There is one other occasion when they may sing it. If he commits a crime, they call him to the center of the village, surround him and sing of love and forgiveness, not punishment. They know that only one who has forgotten his song – his purpose – would intentionally harm others. And when someone is reminded of who he is, that he is welcome in the world, he never succumbs to the temptation of violence or alcoholism. Thus, they say, a friend is someone who knows your song and can sing it to you when you have forgotten it.

It doesn’t matter a bit to me if this is a true story. Anyone with a heart knows that it could be – and needs to be – true.

Let’s keep such a perspective in mind – one that is much older and broader than Judeo-Christian notions of sin and entitlement, or penal systems or philosophies of governance – next time we hear those coded messages. The real possibility of change begins when we are able to imagine a society that knows your song and can sing it back to you when you need to hear it.

This entry was posted in Uncategorized and tagged Barry's Blog # 39: An Indigenous Perspective on the Welfare State. Bookmark the permalink.