But tribal societies, as far as I can tell, rarely punish masturbation. They do set limits on social behavior, but through their rich, polytheistic mythologies, they encourage the development of the inner world, or the imaginative capacity. By contrast, patriarchs from the Catholic Church to the Soviet state have attempted to restrict all imaginative expression – with the exception of the paranoid imagination, something they can control and manipulate. Recall John Ashcroft ordering a veil placed over the nude statue of Justice after 9/11/2001 and Colin Powell veiling Picasso’s great anti-war painting Guernica that hung at the United Nations before he argued for invading Iraq in 2003.

In 2017 a lawyer who was defending a man accused of raping a 13-year-old girl accused her of acting as a temptresses: “You should see the pictures of her and the hair and the makeup.” We should recognize this kind of talk as classic, American blaming of the victim, and it was spoken by a female lawyer.

Why are we so obsessed not simply with defining and controlling smut (related to schmutz), but with describing it – in detail?

Puritans, says the old joke, have the nagging suspicion that someone, somewhere, may be enjoying himself. What are they so afraid of? Hillman answers: “The free-flow of fantasy images. We don’t know where the fantasy might go.” “After all,” writes John Jervis, “sex represents the opposite of mastery of the body: an irrational subordination to the body…”

But the more we control images, the more we are obsessed with them – and the more they demand recognition (“to think about again”). In 1991 the Indiana Supreme Court agreed that the city of Indianapolis could close a private club that advertised nude dancing. Antonin Scalia wrote the majority opinion:

The purpose of Indiana’s nudity law would be violated…if sixty thousand fully consenting adults crowded into the Hoosier Dome to display their genitals to one another, even if there were not an offended innocent in the crowd.

Indeed. Would Puritans be so disturbed by naked dancing if the act didn’t already exist in their imagination? This

is critical: nobody prodded Scalia to visualize that image of sixty thousand people displaying their genitals. His imagination produced it.

Similarly, Texas senator John Cornyn argues, “It does not affect your daily life…if your neighbor marries a box turtle. But that does not mean it is right…” Cornyn’s imagination conjured pictures of inter-species marriage. We could go on and on…Pat Robertson wonders if a man who “…likes to have sex with ducks…” should be protected by hate crime legislation. Former Pennsylvania senator Rick Santorum (do not, under any circumstances, google the word santorum) muses:

But they can’t allow them into awareness with a clean conscience unless they have demonized them and displaced them onto someone else. Only then do they feel entitled to invent images like “sixty thousand fully consenting adults” and invite the Grand Inquisitor back. This is precisely how the Paranoid Imagination works.

Hillman concluded that our fundamental liberty should be the right to fantasize (ideally, through producing one’s own images in art, but if not, by viewing those produced by others). And that right can potentially ignite an insurrection of the imagination “…for fomenting curiosity to pry into what is concealed.” That curiosity could in time disentangle our obscene violence from bodily images, because violence is the enemy, not sexuality.

Well, we perhaps we should all care. Consider Karen McDougal, the former Playboy model who had a nine-month-long affair with Trump. But despite the fact that her story has already appeared in the New Yorker, she is legally forbidden from speaking about it publically because she signed a $150,000 contract, called a “life-story rights agreement.” This granted the Enquirer’s parent company American Media exclusive ownership of her account. AM’s CEO David Pecker (I’m not making this up), a friend of Trump’s, then directed the Enquirer to never publish her account.

What’s unfolding isn’t just a story about a rich man’s extracurricular liaisons or his alleged episodes of illegal sexual misconduct. (This) isn’t really of much interest except to the extent that it exposes the flagrant hypocrisy of his supporters, who rent their garments over the personal immorality of presidents of the past and now profess to be uninterested in such private matters.

But beyond the cultural and social aspects of this scandal and what it says about the privileges of rich, white men and the exploitation of women, there is another serious issue of national civic importance. This is a story about a rich (and now extremely powerful) man who is so worried about being exposed or blackmailed that he has everyone who works for him sign nondisclosure agreements. Now it appears that he set up an elaborate system for paying hush money to keep people quiet. If Karen McDougal and Stormy Daniels are telling the truth this system may include coercion, conspiracy and threats of violence.

What is being sold? The obscene? The forbidden? Who forbids it? Is it, as Hillman said, “lustful images, or imaginal lust” that already exists in our own fantasies? Who is selling these images to us? Why do Americans seem to agree that images of extreme violence are not obscene?

Cui Bono…follow the money. Only in America does the government pay wealthy farmers not to grow crops that might feed the poor. In a culture, as the poet W. S. Merwyn wrote, “…up to its knee in shame,” what does it mean for rich men to pay women not to disclose images of people making love?

So where do we go from here? Back to mythology, of course. Psyche, the loveliest maiden in the world, disobeys Aphrodite’s instructions and opens a box of cosmic secrets. Eventually, after many difficult trials, she marries the goddess’s favorite son Eros, the beautiful, winged youth.

Religion, whether institutional or monastic, commonly raises those who deny the insistent call of the body, who choose abstraction over embodiment, to the highest levels of admiration. 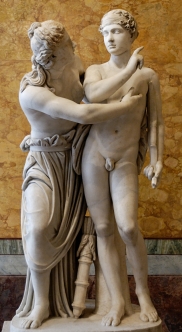 And the product of this union is their daughter Voluptos (voluptuousness). Here, taught Hillman, is our answer to Puritanism’s hatred of images: The end-result of soul-making is not asceticism but pleasure!