I laughed to myself…Here we go. I’m starting a war under false pretenses. – James Stockdale, flying over the Gulf of Tonkin, August 5th, 1964

August 10th, 2020. This month we note many anniversaries. Fifty-five years ago on August 6th, Congress passed the Voting Rights Act. 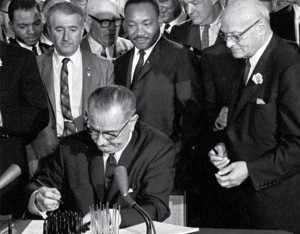 In 1974 on August 8th, Richard Nixon resigned. August 28th is the 57th anniversary of the March on Washington for Civil Rights.

But one anniversary is the most significant. On August 7th, 1964, President Lyndon Johnson signed the Gulf of Tonkin Resolution. The Senate gave him the power “to take all necessary steps, including the use of armed forces,” to fight the spread of communism in Southeast Asia and assist our ally in South Vietnam “in defense of its freedom.”   The story was this simple: North Vietnamese torpedo boats – off their own coast – had attacked American ships without provocation. An admittedly minor (if unproven) altercation with no injuries was all America needed to come and defend freedom.

America was coming to help!

Understanding this phrase – indeed, understanding any aspect of American history – requires knowledge of our mythology. This is the America of Daniel Boone, John Wayne,

Rambo, Clint Eastwood, Buffalo Bill, Batman and all the other heroes who charge in at the last moment to save the innocent community from the clutches of the evil, inscrutable (and usually dark-skinned) Other. Our heroes never throw the first punch.

One of our greatest paradoxes is that, early on, a nation of radical individualists with no innate purposes became an individualist among nations with a divinely inspired mission to make the entire world a better place. In this fallen world, only America had the know-how and the altruistic ideals to make a difference. It was also, however, an open world, offering irresistible opportunities to those capitalists and colonialists who could find reasons to justify military intervention. But their problem was then and always has been how, in a democratic nation, to mobilize public opinion.

Third, unenlightened, oppressed people who longed for our help.

Since by definition American violence must stem from the noblest of motivations, our actions are always re-actions to nefarious attacks from the Other, who hates us out of purely evil intent. Hence, no movie cowboy heroes ever strike the first blow. They intervene only after the Other has threatened someone’s freedom. Similarly, no American President ever strikes at the enemy without first having been attacked. In these narratives, the Other always strikes first, with a “sneak” attack. At the very least, he is preparing to attack, or merely capable of doing so. That, in our myth, is justification for American “pre-emptive” violence.

The events in the Tonkin Gulf fit a tradition extending backwards, past Pearl Harbor, the Palmer raids, the sinkings of the Lusitania and the Maine, the Mexican War and the Witch craze, and forward to the Gulf War and 9/11.

The gunboat diplomacy of the 1890s didn’t begin this pattern; it was already enshrined in American myth. Between 1798 and 1895 (the year conventional historians consider the beginning of American empirical designs), the U.S. had already intervened in other countries over 100 times. Such policies protected business while allowing Americans to innocently believe that they benefited mankind. In 1907, however, future President Wilson admitted (or bragged):

Concessions obtained by financiers must be safeguarded… even if the sovereignty of unwilling nations be outraged… the doors of the nations which are closed must be battered down.

The story remains deeply embedded in our psyches. When economic pressure and clandestine operations or political assassinations fail, American leaders, whether Republican or Democrat, fabricate provocations and attack. This has been a regular pattern, regardless of whether Republicans or Democrats have inhabited the White House, for over 170 years.

Our self-image, however, remains staunchly innocent because the myth teaches that redemption (for both ourselves and those we would save) comes not through peace but through righteous violence. “The distance between such noble principles and such self-serving aggressiveness,” writes historian Walter Nugent, “ is the measure of hypocrisy.”

But Americans, though naïve, are no more inherently violent than other peoples. The state must regularly administer massive dosages of indoctrination to reanimate our sense of innocence and purpose. Propaganda merges with belief; every student learns that America never starts wars but always aids those in need. The mythic appeal is so fundamental that occasional disclosures of the truth do little to alter popular consciousness.

Our media gatekeepers – the New York Times, the Washington Post, all the major broadcast networks and Internet news providers and social networks – make sure of that. Still, the narrative of innocence requires regular ceremonial maintenance.

In August of 1964, Congress (with only two “nay” votes) gave Johnson complete authority to go to war – a war that would last another eleven years, killing some 60,000 Americans (and generating over a hundred thousand veteran suicides) and between three and four million Asians, the vast majority of them civilians.

The mythical god Apollo sent his arrows to kill from a distance. Similarly, American military violence is rarely an intimate affair. Whether it comes from the barrel of an artillery cannon, the rockets of a fighter jet, airborne tankers dropping defoliants on peasants, a B-52 carpet-bombing entire regions from five miles off the ground or the joystick of a computer that directs drone-fired missiles flying over another continent, it is usually perpetrated from a distance. Distant violence allows us to de-sensitize ourselves to the reality of death. In addition, a constant diet of TV crime dramas and semi-comic superhero movies allows us to believe that violence isn’t real, or that, despite our fears, it only happens elsewhere.

My book Madness at the Gates of the City: The Myth of American Innocence argues that American myth has divided the world into “red, white and black” – the external, red other; the internal, black other; and the innocent, white community. In Viet Nam, America enacted this narrative once again, with white generals sending black and brown soldiers into what everyone called “Indian country.” The U.S. dropped seven million tons of bombs; significantly, most were dropped from 30,000 feet, so pilots never heard the explosions or saw the results. They took Apollonic killing at a distance to its extreme: bombing a nation “back to the Stone Age.”

On the ground, however, obsession with the body count, rather than control of territory, became an end in itself. General Westmoreland set the tone by smugly dismissing civilian casualties: “It does deprive the enemy of the population, doesn’t it?” With this kind of permission coming from the top, massacres became commonplace, as they had been in Korea and would continue to be, wherever the U.S. would oppose dark-skinned people.

Since the end of World War Two, the U.S. has bombed nearly fifty countries.

This transfer of killing from a means to an end in itself constitutes a practical definition of genocide…Do Americans hate life? Has there ever been a people who have destroyed so many living things?