Here is the third Verse of The Night They Drove Old Dixie Down:

Like my father before me I will work the land

Like my brother above me who took a rebel stand

He was just 18, proud and brave, but a Yankee laid him in his grave

I swear by the mud below my feet, you can’t raise a Caine back up when he’s in defeat.

The ambiguity of the earlier stanzas continues: many people have heard the first line of this verse as “Like my father before me I’m a working man.” Still more: as Virgil sings of his dead brother he makes a small pun on the small mischief people used to describe as “raising cane.” But the real issue here is that, by repeating his surname (and his brother’s surname), Virgil evokes another Biblical myth, the original war between brothers that we all know as the story of Cain and Abel (Genesis 4), the model for all subsequent wars. 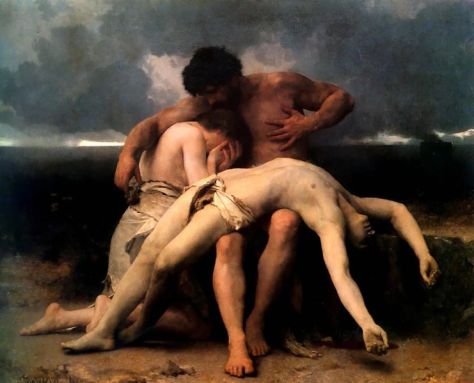 God, as Robertson sings, had taken the very best. And when he heard of the subsequent murder, he cast the first curse:

Virgil Caine’s land will no longer support his family; he must chop wood to make ends meet. So we ask again, whom is he addressing when he cries, “You take what you need and leave the rest”?

Ambiguity and our need to resolve it produces the emotional force that drives some myths. And there is irony here as well. According to Shi’a Muslim belief, Abel (Arabic: “Habeel”) is buried in the Nabi Habeel Mosque west of Damascus, Syria. Here the latest war of brothers rages, a war that would not be happening without American money and armaments.

Below the Cain and Abel story lies another one, as I write in Chapter Nine of my book. Our economic myths follow from our historic assumptions about the infinite resources of an “empty” American land. However,

In truth, modernity assumes scarce resources – fuel, food, education, power, freedom, knowledge and especially love. These assumptions begin in our monolithic creation myth, the expulsion from Eden, and lie, along with the compensating belief in progress, at the core of all western thought. The Old Testament provides occasional visions of plenitude (manna from Heaven); but these are followed by laws and restrictions, which, when disobeyed, result in expulsion. It is, writes (historian Regina) Schwartz, a world “where lying, cheating, stealing, adultery and killing are such tempting responses to scarcity that they must be legislated against.”

Biblical stories of fathers and sons are utterly rooted in scarcity assumptions. Isaac cannot bless both of his sons; apparently there isn’t enough to go around. Forced to compete for the blessing, they establish a pattern in which the father rejects the loser. Earlier, Jehovah preferred Abel’s offering to Cain’s. Even God doesn’t have enough blessing to satisfy everyone. Jealousy, rivalry and murder all follow. This core text of monotheism defines identity as something that is won through competition, at someone else’s expense.

More ambiguity: the line “…but a Yankee laid him in his grave” fits the meter of the song, and it certainly sounds authentically archaic. But Robertson could have written it differently and still fit it into the rhyme and meter. In the context of fratricide – death at the hands of one’s own brother – “laid him in his grave” actually sounds like a gentle act of respect and reverence, a holy ritual. Indeed, the phrase doesn’t clearly indicate that the Yankee had actually killed Virgil’s brother, only that this “proud and brave” teenager was dead. Indeed, as we consider the mythic implications, the “band of brothers” on either side of the firing line have much more in common with each other than they do with the plantation owners and industrialists – the fathers and the father gods – who have set them against each other.

To follow the Biblical tone of the stanza, all we really know is that a jealous god, holder of a very limited capacity for blessing, required – repeatedly – that brothers compete with each other. Why? To prove their worth, or simply for his own amusement? What if history and theology didn’t literalize this image? What if we knew the Latin root of “compete” as “to strive together,” or “to supplicate the gods together”? And we do know that generations later, a member of this same family would be willing to sacrifice his son to prove his worth before this same god.

Our American myth of (white) brother-against-brother offers us a seemingly happy ending. The nation was torn asunder and then reborn. But it could only do so by colluding in a newer but equally toxic story in which the original wounds of racism were covered over rather than healed. The wounds sat festering for another hundred years.

Fratricide perfectly describes the impact of the war upon the American soul, which more than that of any other nation is split against itself. The word evokes such emotion precisely because Americans still hope to heal that split in the psyche. Contemporary battle re-enactments express this longing. Because the issue of race went unresolved, however, the nation achieved only a superficial healing.

We are back to the sacrifice of the innocents, and I invite you to consider the first verse once again: In the winter of ’65. The song does not say eighteen-sixty five. Am I seeing too much here? Of course the song is about the American Civil War, and of course it describes the last year of the war. And yet…Robertson wrote it in 1969, when the Viet Nam war was at its height, when a hundred Americans were being killed every week. And yet…for every American death there were  hundreds of Vietnamese deaths.

Indeed, in 1965 Vietnamese peasants were “just barely alive.” Just as Stoneman’s destruction of Eastern Virginia’s infrastructure and burning of its crops had resulted in mass starvation, the American war of aerial bombardment, torture, “free-fire zones” and spraying of toxic herbicides (“defoliation” – the ultimate euphemism) over huge swaths of the country was amounting to genocide. 1965 saw resistance in Viet Nam and also in the streets of Watts, California – a century after the fall of Richmond, the Civil War was still raging. A half-century further on, urban police, the descendants of the Southern slave patrols, can still murder an unarmed Black man with impunity.

In mythological terms, to “drive Dixie (or anyone) down” is cata-strophic, to be turned away from our obsession with the light, with the gods of the sky, with the myths of growth and national purpose, with the flights of the ego and the spirit, and back towards soul. It is to be humiliated, to return to contact with the humus, the earth. It is to be offered the possibility of grieving, reconciliation and healing.

So the song certainly evokes Hebrew myth (Cain & Abel), Greek myth (Kronos) and American myth (progress, scarcity). And now we can see why the narrator’s first name is Virgil. The Roman poet Virgil is best known for having composed the Aeneid, the epic that tells how Rome was founded by the last survivors of Troy, another city that, like Richmond, invaders had destroyed. A thousand years later, Dante, in The Divine Comedy, chose this same Virgil to be his guide in the underworld, the place of soul-retrieval.

Ultimately, Virgil Caine’s helpless lament is not only for the South. It is for America’s soul, and this is why The Night They Drove Old Dixie Down remains such an emotionally powerful piece of art. In a culture that continues to deny death, that shames a quarter of its children into poverty, that enacts the old myths of the sky gods at every opportunity, that has so few grief songs, we need to hear it and sing it out loud. We need to think about Joshua Chamberlain, a general in the Union Army who had survived the worst of the fratricide. He was present at the awesome spectacle of Robert E. Lee’s surrender on April 9th, 1865, a week after “Richmond had fell.” He looked closely, perhaps for the first time, at those starving “Jonnie Rebs” who so recently had been on the other side of the firing line:

Before us in proud humiliation stood… men whom neither toils and sufferings, nor the fact of death, nor disaster, nor hopelessness could bend from their resolve…thin, worn, and famished, but erect, and with eyes looking level into ours, waking memories that bound us together (my italics) as no other bond…On our part not a sound of trumpet more, nor roll of drum; not a cheer…but an awed stillness rather, and breath-holding, as if it were the passing of the dead! …How could we help falling on our knees, all of us together, and praying God to pity and forgive us all!