Those who surrender freedom for security will not have, nor do they deserve, either one. – Benjamin Franklin

In a land where, since the beginning, our identity has been so bound up in racial purity, the ultimate terror has always been pollution of our pure blood. Hence the long tradition of captivity narratives (see Chapter Seven of my book), America’s original – and still our primary – literary theme. The worst of all horrors, as we will see, was the mere thought that a white woman had been intimate with her Native American captors.

Hence the “one-drop rule” that assumed that blacks were persons with any African ancestry. Only in America, and well into the twentieth century, were “octoroons,” who had seven white great-grandparents out of eight considered to be black.

The light side of our national myth sings of pluralistic democracy and the free competition of ideas. But our shadow story is about paranoid crusades to stamp out any ideas that call the consensus reality, the dominant paradigm, the primary narrative into question. And the fear is always either about pollution of the pure bloodline – the intrusion of the Other from outside, or epidemic (“among the people”), the outbreak of the Other from within.

…The greatest existing cause of lynching is the perpetration, especially by black men, of the hideous crime of rape – the most abominable in all the category of crimes, even worse than murder.

Why did his audience understand that (alleged) rape (presumably of a white woman) by a black man was worse than murder? We find the answer when we remember John Wayne in The Searchers (one of the most honored movies of all time) deciding to kill his niece once he realizes that she has become the wife of an Indian.

Since white women were the essence of purity, rape was pollution by the bodily fluids of the Other; it was penetration through the veil of innocence. And such sins, “even worse than murder,” provoked the ultimate response, what is known today in the Middle East as an “honor killing.”

Taft was followed by Woodrow Wilson, who showed Hollywood’s original “blockbuster” film in the White House in 1915. The Birth of a Nation reached its climax when black men attempted to rape two white women. At the last minute, the Ku Klux Klan raced in on horseback and prevented the heinous crime.

Wilson, the first president from the South following the Civil War, had already re-segregated the federal government. He praised Birth: “It was like writing history with lightning, and my only regret is that it is all so terribly true.” KKK membership, lynchings and white-on-black race riots soared after the movie’s release.

Not content with demonizing blacks, Wilson was an equal-opportunity fear-monger. Earlier, as President of Princeton University, he had contrasted “the men of the sturdy stocks of the north” with “the more sordid and hopeless elements” of southern Europe, who had “neither skill nor quick intelligence.”

Such statements influenced 27 states to pass eugenics laws to sterilize “undesirables.” A 1911 Carnegie Foundation “Report on the Best Practical Means for Cutting Off the Defective Germ-Plasm in the Human Population” recommended euthanasia of the mentally retarded through the use of gas chambers.

Yes, you read that correctly. The solution was too controversial to put into place, but in 1927 the Supreme Court, in a ruling written by Oliver Wendell Holmes, allowed coercive sterilization that ultimately affected 60,000 Americans. The last of these laws were not struck down until the 1970s.

Meanwhile, in Mein Kampf, Hitler praised American eugenic ideology, and in the 1930s, Germany copied American racial and sterilization laws. Years later, at the Nuremberg trials, the Nazis quoted Holmes’s words in their own defense.

Public opinion was opposed to entering World War One. In 1917, almost a third of Americans were either first or second-generation immigrants. People born in Germany and even American-born citizens of German descent fell under suspicion of being disloyal. To overcome the anti-war sentiment, the government passed espionage and sedition legislation that forbade the use of “disloyal, profane, scurrilous, or abusive language” about itself, the flag or the army.

The intentionally broad language served to criminalize dissent at any level. Furthermore, the government pursued a campaign to demonize Germans. It worked, but only because it sent thousands of paid spokespersons across the country, mobilized the mass media, silenced alternative opinions – and because Americans are always ready to be told that they are in danger of attack.

But this was only the beginning, and Germany, after all was a fellow capitalist nation. The real target was communism. The real witch-hunt came at the end of the war, when the year 1919 saw 3,600 strikes involving over four million workers and twenty-six major race riots. When bombs exploded outside the residences of lawmakers in several cities, the New York Times quickly announced that “Bolsheviks” were responsible. The Red Scare, America’s first anti-communist hysteria, enabled the government, in the infamous Palmer Raids, to arrest over ten thousand radicals and deport four thousand. Many were tortured and murdered. 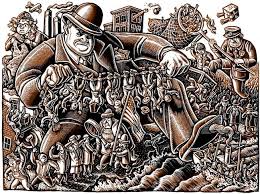 In one sense we can see the events of 1919-1920 as reflecting another period of extreme anxiety and social change that soon resulted in Women achieving the right to vote. But it also saw the end of major immigration, the beginning of alcohol prohibition and the resurrection of the Ku Klux Klan, which grew to include 4–5 million men, including 30,000 ministers.

But class anger persisted. Capitalism desperately needed a diversion, a new external Other, and it found one with the birth of the Soviet Union.

The Times blared, “Bolshevik assault on civilization… Menace to world by Reds… Reds seek war with America.” The U.S. and twelve other nations attacked Russia in an unsuccessful attempt to prevent consolidation of communist rule.

With this new, external, red Other, the American predatory imagination found a bottomless well of paranoia to exploit. The Dionysian menace, once again seeping through the gates of the Apollonian city, was now an international conspiracy to deprive Americans of their property, freedom and dreams. Wherever workers organized for their rights, the media and churches framed their actions as Soviet-inspired hooliganism.

The language they used (and still use) is so revealing. Attorney General Palmer described radicals as “moral rats,” whose “sly and crafty eyes” revealed “cruelty, insanity and crime.” They had “sloping brows and misshapen features.” To Wilson, they were “apostle(s) of Lenin…of the night, of chaos, of disorder.” 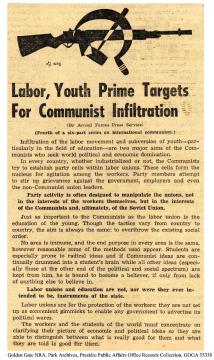 The Red Scare ended quickly, having served its purpose: white America, where blacks were still being lynched, had repulsed the red hordes and was free.

But Satan himself was still out there, just beyond the gates. By now, one could well ask, could “America” exist without its Others? Massive, continuous, daily anti-communist propaganda pictured an immense evil that was not motivated by normal morality but dedicated to enslaving the world. “This is how it looks to the simple folk of America,” writes Historian William Blum:

…the sophisticated, when probed slightly beneath the surface of their academic language, see it exactly the same way.