Part one of this essay, posted as a blog on 5/14/15, described the two main ways in which the media continually re-invigorates the myth of American innocence: fearful images (the shock) and reassuring messages (the awe). Together they contribute to a crazy-making, daily condition of simultaneous denial and distrust they we have long taken for granted.

Even before I was able to post Part Two (on 5/20), we heard of a new, but oddly familiar, news event that exemplified my thoughts. The White House announced that a Delta Force team had entered Syrian territory to kill an alleged ISIS  “commander” and forty other villains in “hand to hand combat.” The “news” came as an uncorroborated statement: an evil mastermind threatened our safety, but our heroes (not regular Army and hence free, like all superheroes, to ignore international law and borders) had eliminated the danger, while actually saving a female captive!

All corporate media carried the story. The NYT admitted that it could not verify it, but reported it anyway. CNN even produced a CGI cartoon version of the raid, claiming that the ISIS soldiers (so evil!) had tried to use women and children as shields. 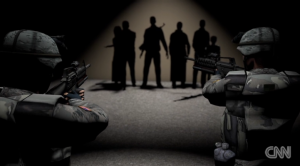 The news came with other implications that you can read about here. Now to continue:

A third factor that contributes to the re-vitalization of the myth of innocence is the mania produced by our technologically enhanced environment. In most large, indoor public spaces (stores, shopping malls and sports arenas) we have gotten used to enduring the unrelenting onslaught of loud music, blinking lights and high-definition visual images. This is most certainly not accidental. Take contemporary restaurant design for example: open kitchens, hard floors and high walls that reflect and increase sound, forcing patrons to shout just to be heard (thereby increasing the noise).

In many places, especially those catering to adolescents, the atmosphere approaches that of gambling casinos, which are deliberately designed to create altered states of consciousness.

The object is to heighten anxiety and encourage the sense that it can be reduced through consumerism. However, because the anxiety never fully dissipates, we continually acclimate to greater levels of it. Could we find a better clinical definition of addiction? Or of madness?

This awkward combination of fear, denial and stimulation has ruled our consciousness during the 65 years of television, which was born amid both the new consumerism and the political terrors of McCarthyism. Lucille Ball diverted us while Richard Nixon admitted, “People react to fear, not love.” My book argues, however, that the roots of this madness go back to the original confrontation of Puritans and Indians. Ever since, we have held the contradictory notions of chosen people and eternal vigilance. If we are attacked, the release of disillusioned energy drives us to violent extremes. Our lost innocence (We have done so much good! Why do they hate us so?) justifies our willingness to support reactionary policies and violent fantasies.

For forty years Americans have flocked by the millions to countless disaster films. This genre works both sides of the fear/denial dichotomy by heightening fear of apocalyptic punishment and then cleanly resolving the threat through the intercession of selfless heroes. Bad dreams constantly interrupt our 400-year sleep of denial, and we awake exhausted.

Recall how, after 9/11, the government took this lunacy to its logical extreme with its color-coded alert system. Recall how we awakened daily to a degree of anxiety that shifted according to arbitrary “findings” – an anxiety that the Iraq invasion only temporarily diminished. And yet, most (employed, white) people had the existential experience of nothing being particularly wrong in their personal lives, at least before the economic crash of 2008. In psychology experiments, this “intermittent reinforcement” drives lab animals mad. And it drives people to release the tension by any means necessary.

The pathology of this condition is that the soul is subject to persistent messages that its emotional intelligence – its intuitive knowing of the sheer craziness of modern life – is completely discounted. It is exactly the same wounding that children receive when adults tell them that they don’t really feel something – and this happens every day of our lives.

Few of us are able to resist the underlying lesson: My ways of evaluating reality are failures. But this is America, and we all carry the legacy of Puritanism. If my ways of evaluation are failures, then so am I. And – since failure in America is always moral failure, then I am also bad – I am a sinner. This has contributed to a massive epidemic of depression, substance abuse and further apathy and disengagement from politics – or the need to identify a scapegoat and punish him in the politics of white resentment.

As I mentioned above, the military phrase “shock and awe” seems to have entered the language in 2003. Well-educated officers, however, pride themselves on their knowledge of the Classics. And there seems to be little doubt that one of them was well aware of an earlier phrase, “awe and terror,” itself likely deriving from the still older “pity and fear.” In Chapter Three of my book I discuss the early social meaning of Greek Tragedy:

Although everyone (in the audience) was familiar with the stories, they did not sit dispassionately, isolated in the darkness, as we do; they crowded together in broad daylight. Confronted with irresolvable conflicts, they suffered like Dionysus himself, weeping openly in a purging (katharsis) of emotion. Aristotle explained that this came through “pity and fear,” but – and this is critical – W.B. Stanford translates eleos (“pity”) as “compassionate grief.” At the end of the day, they were exhausted but revitalized, not because their differences had been resolved, nor because a victim had been sacrificed for their sins, but because they had suffered together.

Is it possible that we accept the daily experience of “shock and awe” because we no longer have the communal ritual forms that might permit us to experience compassionate grief along with our fear? I certainly think so. Imagine a culture that willingly and regularly grieves its communal moral transgressions and never builds up a reservoir of unresolved guilt. It’s much easier to imagine a culture that must continually deny that guilt through recourse to regular celebrations of innocence – and the sacrifice of scapegoats.

If you are wondering about the deeper meaning of our latest epidemic –police violence against unarmed people of color – you need search no further. When societies begin to collapse, they turn to human sacrifice. I covered this issue in depth in my previous blog series (“Hands Up, Don’t Shoot – The Sacrifice of American Dionysus”), concluding with these thoughts:

To deny something is to declare it taboo. And “taboo” (“kapu” in Hawaiian) means “too sacred to mention.” The sacred is a secret, and this is the secret: Americans are unified in their fear of the evil Other, and they (at least enough voting-age white Americans) will regularly declare their allegiance to a culture whose primary religious ritual is the sacrifice of this Other. He is sacred because for a while he takes our sins away. So far, for white people, the sacrifice – which, ironically, made Michael Brown sacred – has been successful.

But this mode of sacrifice – the “shock” of localized, individualized, mass violence – cannot fully re-invigorate our myth of innocence, because its scapegoat suffers only within the polis. Horrifying as it is, the function of racist violence is really to divert our attention from the deeper madness, or if you will, the more profound sacrifice, the “awe,” to our god of nationalism, which we are compelled to enact in every generation. As Carolyn Marvin and David Ingle write:

The doctrine that provides the central experience of Christian faith is the sacrifice of an irreplaceable son by an all-powerful father whose will it was that the son should die violently…Sacrifice restores totem authority and reconsolidates the group. This is why we die for the flag and commit our children to do so. To resolve totem crisis, the totem must re-create its exclusive killing authority out of the very flesh of its members. Blood is the group bond. Blood sacrifice at the border, or war, is the holiest ritual of the nation-state…Our deepest secret, the collective group taboo, is the knowledge that society depends on the death of this sacrificial group at the hands of the group itself…But what keeps the group together and makes us feel unified is not the sacrifice of the enemy but the sacrifice of our own (my italics).

As more and more flaws appear in the fabric of our dying mythic narratives – what these authors call “totem crisis” – and as the crazy-making conditions of our lives make it more and more obvious that the old story is dying but no new story has yet arisen to replace it, watch for the next sacrificial ritual. Watch how the media heightens the anxiety about the latest threat to justify another war (especially as Trump’s approval numbers plummet), even as it mixes the message with assurances that everything’s all right. Watch how much money you may be willing to pay to be ceaselessly told it is. Watch your need to remain innocent.