1492 was the year the Jews were expelled from Spain, after having lived there, according to historical sources, for some 2,000 years. Think about that number: one could argue that they had lived in Spain for nearly as long as they had lived in Palestine. Much of Spain – then called Al-Andalus – had been Muslim for over 700 years. For parts of that time Muslims, Jews and Christians had lived in a “golden age,” brief, shining moments of tolerance and harmony, producing works of vast cultural and scientific significance. The period was known as Convivencia, (“the Coexistence.”)

Traditional Islam actually requires tolerance of the Dhimmi, the other Abrahamic faiths. In fact, the Spanish language is an amalgam of Latin and Arabic. For instance, many Spanish-based English words that begin with “al” – alchemy, almanac, algebra, alfalfa, alcohol, albatross, almond, etc, are Arabic in origin.

You can still see evidence of this cultural harmony in the city of Toledo. Its Synagogue, known as “El Transito,” was built for the Jews in 1360 – by Muslim craftsmen, at the blessing of the Christian King. (This was during the lifetime of Hafiz, and not long after Rumi’s death). In addition to Hebrew lettering, its elaborate carvings include symbols of the Catholic King and verses from the Koran. 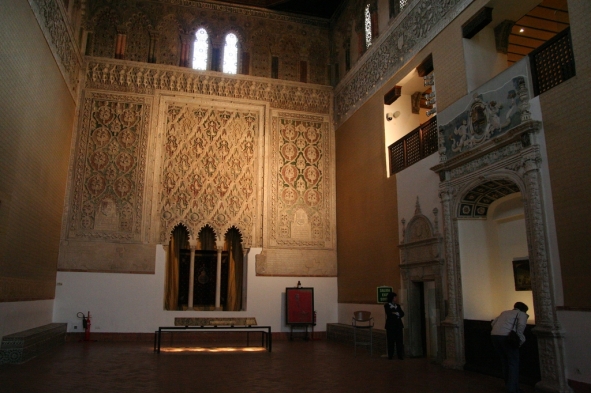 Unfortunately, the peace was destroyed only 30 years later, when anti-Semitic violence broke out all over Spain, and up to 100,000 Jews perished.

Thousands of Jews chose to convert to Catholicism; they were commonly called conversos or New Christians. At first these conversions seemed an effective solution to the cultural conflict: many converso families met with social and commercial success. But eventually this made the New Christians unpopular with the church and royal hierarchies. These suspicions on the part of Catholics were only heightened by the fact that some of the coerced conversions were undoubtedly insincere. Some, but not all, conversos had understandably chosen to salvage their social and commercial prestige by the only option open to them – baptism and embrace of Christianity – while privately adhering to their Jewish practice and faith. These secret practitioners were commonly referred to as crypto-Jews or marranos.

In 1480, King Ferdinand and Queen Isabella created the Spanish Inquisition; under the authority of this new institution, thousands of marranos were found guilty of false conversions and killed. During this period, Ferdinand and Isabella presided over the final wars with the Muslims, which Christians call the Reconquista.

Granada, the last Muslim-held territory in Spain, succumbed to the Christian armies in January 1492, and the Inquisition quickly moved to stamp out all traces of both Islam and Judaism. One of its first acts was to burn thousands of books, the heritage of Spain’s golden age of tolerance. Then the monarchs gave all Jews four months to convert to Christianity or leave the country. They were supposedly permitted to take their belongings with them – except “gold or silver or minted money.”

The punishment for a Jew who did not leave by the deadline was death. The punishment for a non-Jew who sheltered or hid Jews was the confiscation of all belongings and hereditary privileges. Scholars disagree about how many Jews left Spain as a result of the decree; the numbers vary between 130,000 and 800,000.

The head of Spain’s Jewish community negotiated a slight but symbolic reprieve from the original date of July 31st to August 2nd. Why? Because that date corresponded to the ninth of Ab in the Jewish calendar, the anniversary of the destruction of the temple in Jerusalem. He wanted history to understand the depth and breadth of this loss by recalling the date of this second Diaspora when commemorating the first.

On August 2nd, the last Jews left Spain, or as they had called their home for two millennia, Sepharad. As they searched for new homes in the east, they became known as Sephardic Jews, haunted forever by memories of their lost homeland. Many Sephardim still live in Turkey and the Mid-East. Prior to the Holocaust, 50,000 Sephardim lived in Greece but still spoke Ladino, their old Spanish-Hebrew dialect. It is said that as recently as the 20th century, some of their descendants still kept the keys to the houses they had left behind:

The Key of Spain

My forefathers brought it with great pain.

From their house in Spain…dreams of Spain.

My forefathers brought it with great love.

They told their children, this is the heart of our home in Spain…dreams of Spain.

My forefathers brought it with great love.

They gave it to their grandchildren for them to keep in the drawer…dreams of Spain.

In one of history’s great ironies, many Palestinians still possess the keys to houses that the Israeli army forced them out of in 1948. This essay is about just that: the ironic narrative of Jews and Muslims, their shared respect for each other and some astonishingly synchronistic events.

Students of art have long appreciated Medieval illuminated (adorned with graphics) manuscripts such as the Lindisfarne Gospels and the Book of Kells. Few realize that not all of these masterpieces were Christian in origin; some were created by Jews as well. Until a certain codex came to light, in 1894, art historians widely believed that figurative painting had been entirely suppressed among medieval Jews because of the injunction in the Ten Commandments, “Thou shalt not make unto thee any graven image, or likeness of any thing”—a proscription echoed in many Islamic, and some Christian, societies.

One Sephardic family took with them such a manuscript, a Passover prayer book that had been produced during that harmonious period in the 1350’s. We now know it as the Sarajevo Haggadah, and it is considered to be one of the most valuable books in the world.

But let’s get back to 1492 Spain. A Haggadah, from the Hebrew root “HGD”—“to tell”—relates the story of the exodus from Egypt, which Jews are commanded to tell to their children. It is used at the table during the Passover Seder. (Wine stains on the parchments of the Sarajevo Haggadah testify that this book, though lavishly designed, was read at such family feasts.) The little parchment codex was rich in gold and silver leaf, lavishly illuminated with precious pigments made from lapis lazuli, azurite, and malachite.

The illustrations resemble those of medieval Christian Psalters, but some of the decoration calls to mind an Islamic style of ornamentation. One particularly mystifying scene depicts a Spanish Seder with a woman whose black skin and African features are in stark contrast to those of other family members around the table but who holds a piece of matzo—unleavened bread—and wears the costume of a wealthy Spanish Jew of the era.

As I have noted, the last Jews left on that auspicious date of August 2nd. The next day – August 3rd – three ships left Seville’s port heading west to find the fabled Indies. Christobol Colon took with him a Jewish scholar, Luis de Torres, who knew both Spanish and Arabic. Since Arabic was still the language of high culture in Spain, Columbus naturally assumed that it would be spoken in the Indies, and that he’d need a translator.

In Portugal, where many Spanish Jews found a very brief refuge before being expelled a second time, ownership of Hebrew books became a capital offense. One man’s account, from Lisbon in 1497, tells how he “dug a grave among the roots of a blossoming olive tree” to hide his books, knowing that it was unlikely he would ever return to unearth them: “Yet, although a tree flourishing with lovely fruit stood there…did I call it ‘Tree of Sorrows.”

A place to settle, but not to call home: Sometime in the following century, the Haggadah found its way to Venice, where a polyglot Jewish community thrived on a tiny island that had previously served as the city’s foundry, or geto. The first Jews, German loan bankers among them, had arrived in 1516. Next came Levantine Jews, whose ties to Egypt and Syria were valuable to the city’s vast trading enterprise. The exiles from the Iberian Peninsula gradually increased the population, and the ghetto’s tight-pressed multistory dwellings became the tallest in the city. If you go to Venice today, you can still see the tiny neighborhood that housed thousands of Jews on only a few acres.

Venice offered Jews property rights and legal protection unmatched elsewhere in Europe at that time. Still, they had to wear colored caps to identify them when they left the ghetto, and its gates were locked each night. They were banned from most trades, including printing, and any Hebrew books that were not approved by an ecclesiastical censor of the Pope’s Inquisition were destroyed in public burnings.

Books could be destroyed or defaced for many perceived heresies—such as suggestions that the Messiah was yet to come, or arguments against the use of saints or any other intercessors as mediators between humans and an indivisible God, or any reference to Jews as “holy” or “pious.” A Catholic priest, Giovanni Domenico Vistorini, inspected the Haggadah in 1609. Nothing is known of him beyond the books that bear his signature, but many of the Catholic Hebraists of the time were converted Jews. Vistorini apparently found nothing objectionable in the Haggadah. We can still see his Latin inscription, Revisto per mi (“Surveyed by me”) on it.

How or when the book left Venice and came to Sarajevo is a mystery, but in 1894, just over 400 years after it left Spain, the National Museum in Sarajevo, Bosnia acquired it from an indigent Jewish family named Kohen.

Because Bosnia was then occupied by Austria-Hungary, officials sent the Haggadah for evaluation to the empire’s capital, Vienna, where it was immediately hailed as a masterpiece, and then damaged by an inept conservator who cropped the parchments and bungled the rebinding. No one knows what the original covers of the Haggadah were like, but most books with such liberal use of gold leaf and expensive pigments also had elaborate bindings—hand-tooled kid, embossed silver, or mother-of-pearl inlay. The Viennese conservator discarded whatever binding was on the book in 1894 and replaced it with cheap boards covered in an inappropriate Turkish floral design.

As early as 1565, the first Jews had settled in what was then an Ottoman market crossroads. The city grew to graceful, cosmopolitan maturity, and became known for its tolerance. The Muslims’ mosques, the churches of the Serbian Orthodox, and the Croatian Catholics occupied the same city blocks as the synagogues, and residential neighborhoods were mostly mixed. It was another “Convivencia.” This story has been fictionalized in Geraldine Brooks’ excellent novel People of the Book.

You can read an essay of hers with more details here, but the true story and its details are even more amazing.

Next: What happened to the book in later centuries. Continue to Part Two.