Barry’s Blog # 190: Stories We Tell Ourselves About Barack Obama, Part One of Fifteen

We can and should denounce Donald Trump. But until we address the systemic causes that gave rise to him, we are wasting much of our energy. As Glenn Greenwald writes: “Focusing on and attempting to counter the fundamental flaws of the Democratic Party is not a distraction…it is a central priority, a prerequisite for any kind of success.”  We have Trump now not despite Obama, but because of Obama.

This essay expands upon a blog series I wrote in March 2016, before anyone took Trump seriously. Now, barely an hour passes without some new announcement or revelation more outrageous, sickening and apocalyptic than we ever thought possible. The mainstream media are demonizing him even as it hurries to normalize his policies. We recall, however, that apocalypse means “to lift the veil.” And when we speak about ourselves as Americans, the veil to be lifted – the clearer view of reality – is always, always about our perpetual attempt to remain innocent. So this is also very much about how we have seen ourselves over the past eight years.

Why even bother writing about old issues such as Obama? Because, as fascism descends upon us, liberal America has been attempting to walk a fine line: de-legitimizing the new regime, but without examining any of the bedrock assumptions of our myth of innocence. In other words, by contrasting it with the saintliness of the old regime. I mean literally. For four months, social media has been awash with articles and imagery in what a mythologist would call the longing for the return of the King. 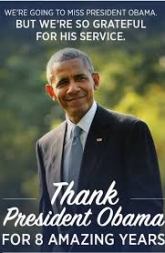 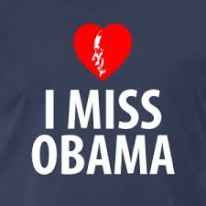 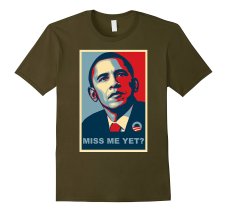 “With Barack Obama’s exit the US is losing a saint,” writes Simon Jenkins in the Guardian, whilst Ann Perkins praises his “grace, decency and defense of democracy”. Lola Okolosie rhapsodises on his legacy of “warmth, love, resilience.”

But I say: as bad as things are getting, one of the few pieces of good news is that we have yet another opportunity to examine how we construct our identity with the stories we tell ourselves. Our first responsibility as mythological thinkers is to cultivate discrimination, to take a step back and attempt to perceive the narratives that are being played out in our culture, before we can begin to offer new ones. We must understand how we participate in those stories by our own willing – generally unconscious – acceptance of their primary themes.

It is useless and counter-productive to criticize Trump as merely a negative, even terrible version of an essentially positive story of American exceptionalism. There is nothing to be gained by arguing, for instance, that he is dangerous, stupid or unpatriotic because he won’t listen to the “intelligence community,” as if progressive people have any business aligning themselves with the murderers and regime-changers of the CIA.

This is not a case of politics making strange bedfellows; it’s two branches of the ruling class in a food-fight; it’s the old dinosaurs of the Democratic Party defending their failed neoliberal policies by manipulating genuine popular rage. The only meaningful way to oppose Trump is from the position of a new story that reveals how the myth of innocence – even, perhaps especially in its liberal varieties – has led us all up Shit Creek.

That previous series was stimulated when I noticed a newspaper review (“Grading the President”) of yet another book about Obama, and I realized how much we all give “grades” to celebrities and politicians, as if we were teachers in a classroom.

It was primary season: both sides were pandering predictably and shamelessly to their bases. The Republican clown car had optimized its seven-year liturgy of demonizing Obama, while Hillary Clinton spoke of “furthering his advances” and Bernie Sanders, attempting to define a progressive alternative without alienating him, offered only the mildest of direct criticism. At further extremes – white supremacism on one end and anti-imperialism on the other, there was much stronger language.

We had all been grading the president since (and for some of us, before) he took office. To embody that role – the “grader” – is to have expectations. In the real world of politics, this position opens up many of us to the charge of being idealistic, impractical and/or unrealistic. But depth psychology tells us that all expectations are unrealistic, because they tell us more about ourselves than about the objects of our expectations. Is it surprising that, encountering the subject of the presidency, we find ourselves in the world of myth, specifically the myth of American Innocence, and the degree of innocence each of us holds to?

This version of the story is about the archetypal King and our expectations – our longing, our projections and our disillusionment. But it is also about history, the present (in a time of constant warfare and massive human suffering) and a very uncertain future. As I wrote four years ago:

Every American president at least since Harry Truman, and arguably for much longer, has been faced with a unique political dilemma created by two conditions. The first is the reality of capitalist domination of politics: the President is essentially a spokesperson for the empire, not its ruler, not even the primary “decider”…The second is his symbolic role as king-figure. As head of state, he embodies the mythic figure of the king for his people. These two conditions require that he play two opposite aspects of the myth of innocence against each other.

As spokesman, he must continue at all times to amplify our paranoid fear of “The Other” so as to justify military intervention abroad and repression at home. In other words, he must manipulate the traditional white American sense of being the innocent victim, or at least the potential victim, of some dark (and dark-skinned), irrational, violent, predatory outsider.

As King-figure, however, his job is to absorb the idealistic projections of millions of people and convince them that his intentions (and ours) are noble, protective and altruistic. To do that, he must play the exact opposite of the victim, the Hero. He must reassure Americans of his – and our – ability to meet the threat and defeat it, while simultaneously bringing the Good Word of our compassion to those evil ones who would – for no apparent reason – harm us.

In discussing politicians, we inevitably encounter the frustrating gap between rhetoric and action, and mythology is clear on this: what do they actually do? In James Baldwin’s words: “I don’t believe what you say, because I see what you do.” If you don’t follow me on this, then listen to the notorious John Mitchell, Attorney General under Richard Nixon, who for once was remarkably candid when he told the press at the onset of their administration in 1969: “Watch what we do, not what we say.”

It’s a handy piece of advice in the Age of Obama too…There’s the added difficulty that Obama likes to say two different things in the same speech, usually prefaced by his trade-mark “Let me be clear.”

This perspective invites us deeper into mythic paradox. It simply doesn’t matter, for example, that Oedipus didn’t know that Laius was his father and that Jocasta was his mother. What matters is this: he slept with her and murdered him. That’s the mythological “fact.” We can interpret it forever, but in myth there is no difference between motivation and action. For this reason, I won’t be analyzing Obama psychologically. It doesn’t matter what his values were as a community activist, or what long process led to their being corrupted.

And to take an unflinching look at the Obama years, we have to take the same approach. Then, once we acknowledge what he did – not what he claimed to want to do, not what he was prevented from doing – we have to ask ourselves: What story did we consume? What does it say about who we are?

7 Responses to Barry’s Blog # 190: Stories We Tell Ourselves About Barack Obama, Part One of Fifteen