November 2006. We enter the dark half of the year with memories of the holocaust of New Orleans still fresh in our minds. 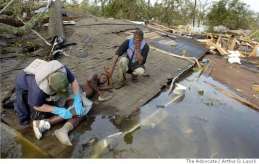 It has been a year of tragic images: genocide in the Sudan, cluster bombs in Lebanon, orphans and martyrs in Palestine, suicide bombings in Iraq, Shri Lanka and Afghanistan – and everywhere, grieving survivors. Those terrible images evoke others. New York City firemen on 9/11/2001 and for weeks afterwards frantically searching for the bodies of the dead, especially their own dead. 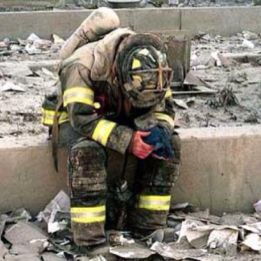 Relatives of the victims who were grateful for anything – even a bone fragment – that might represent the body of a loved one; something to which they could give proper burial.

Such scenes stir other memories (for those of my generation) from the Vietnam War, of soldiers risking their own lives – and often losing them – attempting to recover the dead bodies of friends. Many questions arise: Why, thirty years since the end of the war, does the search for bodies continue? What else are the survivors searching for? Why does the memorial to the dead of that war remain the most visited shrine in America? Why do victors commonly desecrate (“to destroy the sacredness of”) the dead bodies of the enemy?

What exactly do people mean when they wish that deceased souls should “rest in peace”? How do we define or describe that state of rest – and what if they are not at peace? What is the value in “paying our last respects” (respect = “to look again”)? Why do we have to pay? In recent years we have often heard the term “closure,” but is there any real agreement about its meaning? Why do we appear to agree on the value of closure – and why do we so rarely achieve it?

The inability to acknowledge suffering and achieve emotional closure haunts us. Looking backwards at the charred ruins of the twentieth century, I note several factors that contribute to the characteristically American denial of death.

First: the old mythic pattern of resolution of dispute through violence – and very often it is high-tech violence at a distance – that emotionally insulates Americans from the consequences of our behavior.

Second, the cult of heroic, masculine control that denies men permission to shed tears. As many war veterans have eloquently admitted: “…if one were to let only a little out, the floodgates might be flung open and it might never end.”

Third: the massive (there is no other word for it) karmic weight of the ungrieved histories of genocide and slavery.

And fourth: the myth of American innocence that justifies the crimes of empire with an ideology of God-inspired good intentions: we had to destroy the village in order to save it.

Desensitized by movie violence, separated from the Old World and its wars by two oceans and shielded from the human pain of conflict by a compliant media, we have been able to ignore the corpses. How else would the shameful images of Abu Ghraib fade so quickly from the public memory? Is it any wonder that (white) Americans, relative to almost every society on earth with the possible exception of the British, show so little emotion at actual funerals? Anthropologists Richard Huntington and Peter Metcalf, in Celebrations of Death, write, “So thoroughly have Americans sealed themselves off from death that many have never seen a corpse. Others have seen one only in the carefully stage-managed context of the funeral parlor, the body elaborately packaged and beautified.”

Visitors from traditional societies such as West African shaman Malidoma Some´ have spoken of the tremendous weight of unexpressed grief carried by the typical American, and how conducive to illness such a pattern is on the individual level. He argues that the inability to fully grieve results in a corresponding inability to experience joy as well: “People who do not know how to weep together are people who cannot laugh together.”

We may find some answers to our questions in the beliefs of indigenous people, many of whom claim that death is not the opposite of life, but the opposite of birth. Or, as the Irish say, “Death is only the middle of a long life.” In the tribal imagination the souls of the dead go neither to heaven nor to a nameless void, but to the Other World, or the underworld.

In mythic terms we may think of those souls as journeying first through a liminal period – betwixt and between the worlds of the living and the dead. Liminal comes from the Greek word for threshold, which also gives us the word Limbo. We imagine those souls in a mysterious transition prior to rebirth into some new state of being. But the completion of the transformation, as in all initiations, requires the intercession of a greater community of beings who can facilitate the burial – both literal and symbolic – of the old before the appearance of the new.

Proper burial is a fundamental theme found throughout Greek myth. The Iliad includes many examples of warriors fighting to the death – just as in Vietnam – simply to reclaim the corpse of one of their own friends. After his death, the ghost of Patroklos comes to his friend Achilles in a dream and begs him to finish cremating and burying his corpse because the residents of Hades will not receive him; they have forced him to wander until the rites are completed. When Zeus admits that he is powerless to cancel the fated death of his mortal son Sarpedon, he whisks the freshly killed body back to Sarpedon’s home of Lycia, where at least it can receive the proper rites.

Perhaps the most remarkable and moving scene of the entire epic begins when the Trojan king Priam, escorted by Hermes – the Guide of Souls – crosses through the enemy lines at night in order to beg Achilles for the body of his son Hector. It concludes with the two implacable enemies grieving together and sharing a meal. The Iliad actually ends not with the popular account of the Trojan Horse and the destruction of Troy, but with a lengthy description of Hector’s funeral. It is Western culture’s most basic image of the death of the Hero (symbolically that part of our own “unripe” masculine identity) and the proper burial that is necessary for a new identity to emerge.

Similarly, The Odyssey has many scenes in which the Greeks mourn the loss of their comrades (the Greek ideal of heroic masculinity allowed the shedding of tears). Before Odysseus visits the shades of the underworld, the goddess Circe instructs him to feed those ghosts sacrificial blood before they will be allowed to tell him about his future.

This scene is a reference to the old idea that there is a reciprocal relationship between the worlds. It implies that the beings on each side of the veil have needs that can only be met by those on the other side. The spirits and ancestors need humans for their work as much as humans need them. What is broken in one world is repaired in the other. Some´writes:

Each needs the other because each feeds the other…Without the other, neither is complete …our relationship with the spirit world is a two-way stream…There is a reciprocity here that really cancels out the whole sense of hierarchy.”

After his visit to the underworld, Odysseus cannot proceed homeward towards his destined reunion with his wife and son without first returning to Circe’s island and performing the proper burial rights for one of his dead crewman. In one of the final scenes, after killing the suitors who had been ruining his palace, Odysseus refuses to allow his maids to celebrate, telling them, “It is not piety to glory so over slain men.”

Tragic drama focuses on this theme as well. Of the thirty-three works of the three major Athenian playwrights that have survived, nine of them deal directly with the theme of the need for proper burial, or of burial refused by an enemy.

The myths reflected the belief that death was a process, rather than a single event in time; the dead required the focused acts of the living in order to complete their transition to the other world. But – of equal importance – the living needed this process to succeed as well, because souls who wandered in the liminal space between the worlds as ghosts would inevitably cause suffering for the living. Thus the unburied dead in particular were condemned to haunt their relatives – those who should have performed the appropriate rites. Such souls were stuck, unable to conclude the last of life’s initiatory processes, the welcoming “home” by their ancestors in the other world. Like some mentally ill people in our world, they were “betwixt and between.”

Looking at funeral customs that have survived in the indigenous world, we observe the same pattern of belief – death is a process that requires deep commitment on the part of the survivors to be completed successfully. The dangerous period of liminality, which only begins with the funeral, can last for months; for example, in Japan and Tibet a series of rites for the deceased culminates on the 49th day after death. Jewish tradition also has extensively timed rites of mourning. It seems that older cultures have always understood the critical importance for health and stability – in both worlds – of complete closure in the fullest sense of the term.

3 Responses to Barry’s Blog # 216: Rituals of Grief, Part One of Three