At some level, we all really do know that the Hero must die so that an elder may be born. In some African tribes, adolescents were expected to demonstrate their sincerity by dancing at great length before the hut of the elders, pleading for initiation.  They knew the consequences of not being admitted – remaining boys in the eyes of the community – and they knew that such a condition was unacceptable.

In a post-modern world that has elevated the productive, achieving, radically individualistic male to the status of demi-god who is privileged to lord it over all the “losers,” such consequences, if inchoate, are even greater. Twenty-first century capitalism produces a vast surplus of un- and under-employable people, mainly men, who understand very well that they have been permanently excluded from the initiatory group of the upwardly-mobile.

As early as 2004, long before both the depression of 2008 and the opioid epidemic, four million American eighteen to thirty-four-year old men were unemployed, were not in school and lacked a degree beyond high school. Fourteen years later, in a culture that identifies boys as men only when they have disengaged from family and established independent households, fully one-third of them still live with their parents.

Not only are these young and not-so-young men unable and often unwilling to function productively anymore – and, many of them will ask, what the hell does it mean to be “productive” anyway? – they can also see that most job growth is now in areas (health care, elder care, food services, housekeeping, etc.) that either have been served traditionally by women or require high-tech educations.

Politically, it gets much worse: for at least two generations they, their parents and their grandparents have been deluged with right-wing talk radio, internet noise and fake news telling them that the source of their joblessness – and their pain – is affirmative action programs instituted by the bi-coastal elites, and benefitting the undeserving poor. It’s a very old story, and the personae have changed over the years. But its essence remains: you have been victimized by the Other.

Chapter Five of Madness At the Gates of the City discusses the vast array of means by which we try to achieve the initiation into manhood that we desperately, if often unconsciously, desire:

As initiation rites have disappeared, so have the clear distinctions between life’s developmental stages. Consequently, adolescence in America seems to continue indefinitely. This is not to say that there are no initiations in modern life. The dizzying pace of change evokes liminality in everyone, and the psyche reacts to separation and loss as if initiations were underway. But we endure these transitions alone and unprotected by ritual and community. From childhood trauma to divorce and war, no one puts our suffering into a larger context or welcomes us home. This drains our capacity to express our purpose, and we live lifetimes of incomplete initiations.

Those unconscious means include fraternity initiations, 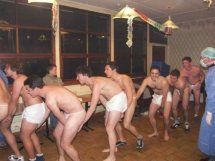 gangs and the military. What all the young men who pursue these means have in common, whether they can articulate it or not, is the desire to die to an old, no-longer-satisfying identity and be reborn into a new one.

Below the incapacitated, alienated, depressed and increasingly angry white male lies that same desire. But with no real community of elders to recognize his condition, guide him in his transitions or welcome him home, and no ability to experience that condition in symbolic terms, his only way out may be literal, internalized expression of that rage as suicide.

Otherwise, the victim who cannot be a hero will search for villains or scapegoats. Some will do so with energy derived from their thwarted desire to play the hero, so they will organize collectively as victims, but with truly “heroic” enthusiasm.

This is right-wing activism: deeply committed, emotionally intense, resentful yet joyfully collective, sustained effort under the identification as victim – despite their unacknowledged white privilege.

Their targets are precisely those actual victims (race, gender, immigration) whom they have been educated to perceive as questioning or contesting that privilege, and whose presence in the Polis on a daily basis can’t help but remind them of the weight of grief they all carry below the anger.

Hence, we have, and certainly not for the first time in our history, groups of relatively well-off people who actually perceive themselves to be the victims of people who have far less than they do. Again, we are speaking of material interests, not the unquantifiable benefits of whiteness. And yes, we’re beginning to see this pattern in Britain, Germany, Poland, Hungary and the Czech Republic. But it bears repeating: only in America, from the very start, have millions of economically insecure white people served the interests of the rich because to do so is to feel accepted among the elect and not “the Other.”

This is a one-paragraph history of American politics, from Bacon’s Rebellion in the late 17th century to the Civil War, Reconstruction, Jim Crow and Populism, all the way through Ronald Reagan to Trump. Yes, there have been regular exceptions when working people joined together to demand their rights, expanded the sense of who is a member of the Polis and welcomed the Other into the gates of the City.

May “the arc of the moral universe,” as Dr. King said, “bend toward justice.” In the next chapter, I’ll discuss right-wing activism of the mega-wealthy, but I’ll end this one by recalling that Lyndon Johnson understood the fundamental reality of power in America when he said:

If you can convince the lowest white man he’s better than the best colored man, he won’t notice you’re picking his pocket. Hell, give him somebody to look down on, and he’ll empty his pockets for you.