In January 2013, Chuck Todd, chief White House correspondent for NBC, addressed a conference of professional vote-counters. His audience included sales reps for voting machine and software companies, as well as several state secretaries of state. Todd ridiculed critics of electronic election machines, saying that they must be paranoid to think that anyone would deliberately alter election results. Earlier that week he had tweeted: “The voting machine conspiracies belong in the same category as the Trump birther garbage.”

(It was a time of innocence, you might say, long before 2018, when almost all of the corporate media, including Todd himself, would regularly make allegations about Trump colluding with “the Russians” to “hack” election machines in 2016.) 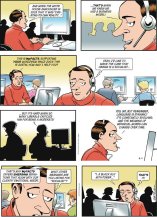 Just a few days later, throughout February of that year, readers of daily newspapers saw a series of very funny “Doonesbury” comic strips in which a consultant named Austin who works for “MyFacts” furnishes spurious “facts” on demand. In this panel he makes fun of right-wing conspiracies:

In the interest of fairness, perhaps, a later panel attacked “conspirators” on the left:

Austin:            I’m sorry sir, but I’m showing our truther line has been discontinued.  Can I interest  you in another elaborate hoax?

This was a type of humor that Doonesbury has excelled in for years, making fun of “everybody,” especially the most earnest among us. In 2009 one of his panels featured his liberal talk-show host Mark Slackmeyer interviewing a college professor:

Slackmeyer:   Professor, is there any counter to these powerful theorists?

Professor:      Not really, Mark. Only the reasonists.

Professor:      They believe in an evidence-based world, something called rationalism. But it’s a tiny group, not so influential.

What’s going on here? By including very widely held left-wing political opinions in the same category as these right-wing ideas, Doonesbury was defining them all as conspiracy theories. He was doing exactly the same thing (granted, with more humor) from a liberal perspective that Todd was doing as a corporate spokesperson disguised as a “commentator.”

This is the narrative of false equivalency, which instructs Americans that any notions differing from mainstream understandings of reality – no matter how popular – are equally worthless. Here’s the logic:

We define A as silly.

We mention B next to A.

Therefore, B is silly and unacceptable.

Racism was once the law of the land.

Legally, whites and blacks have equal access to jobs and housing.

Therefore, there is no longer any need for anti-discrimination policies.

This kind of FE (I’ll be using the abbreviation throughout this essay) is often told by those people who were, as the saying goes, “born on third base, and think they had hit a triple.”

FEs tell us more about the subject (who is making the FE) than about the object (whom they are making it about). When FEs are told honestly and innocently (as opposed to, say, by a well-paid FOX News hack), they often imply a certain cognitive dissonance:

B – We dislike Trump.

C – Therefore, we are good, and we feel good about ourselves.

D – John McCain was a warmonger who voted with Trump 83% of the time.

F – Therefore, McCain was good. He was a “maverick.”

G – To convince ourselves of F, we must ignore D. (This is cognitive dissonance.)

H – Since McCain was good, he was like us.

I – Therefore, we feel even better about ourselves.

This is one way in which we perpetuate the myth of American Innocence.

There are countless websites and books devoted to narratives that marginalize those who question the dominant paradigms of the culture. They typically do this by offering lists of “loony” theories from the perspective of the “rational center.” In almost every case, such gatekeepers lump all of the questioners together. Then with patronizing, pseudo-psychology, they explore the unconscious motivations of conspiracy theorists, be they fascists or anarchists, Christians or Pagans, oligarchs or street people.

Such styles are well within one of two very old American traditions of gatekeeping, the purpose of which is to shore up the cracks in the myth of American innocence. One is to lie outright about American history. Here’s the logic:

A is a story that makes us feel good about ourselves. It reminds us of who we are.

There is no other story, no B.

Since A is the only story, we are justified in knowing who we are and feeling good     about ourselves.

It is the gatekeepers – religious, media and academic, who decide which stories we hear. As I wrote in a previous blog,

The “Dunning School” of racist historians dominated the writing of post-Civil War history well into the 1950s. William Dunning, founder of the American Historical Association, taught Columbia students that blacks were incapable of self-government. Yale’s Ulrich Phillips defended slaveholders and claimed they did much to civilize the slaves. Henry Commager and (Harvard’s) Samuel Morison’s The Growth of the American Republic, read by generations of college freshmen, perpetuated the myth of the plantation and claimed that slaves “suffered less than any other class in the South…The majority…were apparently happy.” Daniel Boorstin’s The Americans: The Colonial Experience doesn’t mention slavery at all. Similarly, Arthur Schlesinger’s Pulitzer Prize-winning The Age of Jackson never mentions the Trail of Tears.

The process of initiation into higher education (and the careers it opens one to) nearly guarantees that those admitted within the pale are already thinking within very narrow boundaries. This is clearly true for journalists as well. Noam Chomsky has said that this is “a system of imposed ignorance” in which the most highly educated people are the most highly indoctrinated:

A good education instills in you the intuitive comprehension – it becomes unconscious and reflexive – that you just don’t think certain things…that are threatening to power interests.

Over the years, polls clearly indicate the results: the higher one’s education, the more one is likely to unquestioningly support America’s wars of aggression – and the reverse is also true. Despite the public stereotypes of rebellious students during the Viet Nam years, for example, it turns out that resistance to the draft varied inversely with income and educational levels.

The other tradition is to ridicule any political positions further out on the spectrum (left or right) often enough so as to deprive them of legitimacy and, by contrast, manufacture the legitimacy of the “center.” Here’s the logic:

A is too far out in one direction. It may be admirable, but it’s unrealistic or impractical.

B, similarly, is too far in the other direction – even if it is not admirable.

C lies in between them.

A and B should negotiate until they compromise at C.

This, most politicians and activists tell us, is how things get done in the real world. Especially since the upheavals of the 1960s, countless books have extolled the innate wisdom of the great middle and the need for idealists to find common ground with their adversaries. It’s often very good advice.

But I’m not talking about people who see some good in each side of a debate, who play by the same rules and have comparable, idealistic visions of the common good. I’m talking about those spokespersons for that same corporate-consumerist, business-as-usual, consensual reality of American empire that the 60s called into question. I’m talking about people whose jobs depend on their knowing very well that allowing actual alternative thinking (socialist; anarchist; anti-imperialist; environmentalist; anti-consumerist; anti-policing; advocates for racial, healthcare, prison, gender, immigration and drug justice, etc.) into the public discourse and airwaves would threaten both that consensus and their own jobs. I’m talking about people who want us to forget about radical change because – they tell us – some of its adherents and some of their proposals are as laughably, preposterously unacceptable as are those on the other extreme.

6 Responses to Barry’s Blog # 244: False Equivalencies, Part One of Eight