Barry’s Blog # 252: The Mythic Foundations of Libertarianism, Part One of Six

An earlier version of this essay was published in 2013 as the introductory chapter in Uncivil Liberties: Deconstructing Libertarianism, published by the Praxis Peace Institute.

You can be greedy and still feel good about yourself. – Ivan Boesky

This is America. If you’re not a winner, it’s your own fault. – Jerry Falwell

Free money makes the rich strong and wise, while it corrupts poor people, making them stupid and weak.– Lewis Lapham

In most parts of the world, the terms “libertarian” and “libertarianism” are synonymous with Left anarchism.  Noam Chomsky writes:

The term libertarian as used in the U.S. means something quite different from what it meant historically and still means in the rest of the world. Historically, the libertarian movement has been the anti-statist wing of the socialist movement. Socialist anarchism was libertarian socialism. In the US, which is a society much more dominated by business…it means eliminating or reducing state controls, mainly controls over private tyrannies. Libertarians in the US don’t say let’s get rid of corporations. It is a sort of ultra-rightism.

But political philosophy doesn’t fully explain why libertarianism as we know it has been popular in only one nation in the world – America. To go deeper, we need to ground ourselves in mythological thinking.

The myth of American innocence is a story we have been telling ourselves about ourselves for nearly four hundred years. The idea of a nation divinely ordained to save the world evolved so as to justify the original colonization effort. Later, in changing conditions, it helped account for America’s unique and rapid expansion and its worldwide economic and cultural domination.

This story still moves us deeply because it inverts the guilt of history. It instructs us that white colonizers were the actual victims of the westward expansion — attacked and massacred for no reason by evil savages emerging from the dark forests. Its subtext, of course, is our violent and racist history. But precisely because of this history, no other nation has gone to such lengths to define itself by excluding so many from full membership, while regularly congratulating itself with pervasive stories of freedom and opportunity. This is how we resolve the contradictions of this history, and how we live with ourselves, and with the cruel white supremacy that pervades our daily lives.

While white Americans across the entire political spectrum adhere to this myth in deep, often unconscious ways, libertarians exemplify it in its purest form. Their ideas of history, culture and the relationship between the individual and the community reveal an essentially American, almost childlike innocence that borders on willful ignorance. Or, as the old joke goes, Question: what’s the difference between ignorance and apathy? Answer: I don’t know and I don’t care!

First, let’s get the easy issues out of the way.

1 – Any teenager could quickly dismiss any politician who claims to favor “small government” with a quick examination of his or her positions on military spending, foreign policy, domestic surveillance, corporate welfare, abortion rights, immigration, gay marriage or medical marijuana – all of which assume a large, centralized government and mandate regular state intervention in private lives.

On the national scene, this leaves only Ron and Rand Paul, whose stated willingness to use the power of the federal government to outlaw abortion clearly contradicts their claims to be libertarians. As for their limited anti-war views, activist Tim Wise writes, “Even a broken clock is right twice a day.”

2 – Chomsky disposes of the magical notion that American prosperity was built upon free markets: “Genocide and slavery: try to imagine a more severe market distortion than that.” We are talking about an entire hemisphere conquered by military invasion and then distributed free to (very) selected populations, who then went on to make their fortunes. Indeed, almost all developed countries originally got rich not through free markets but through tariff protection and government-subsidized military conquest. 19th and early 20th century U.S. tariffs of 40 to 50 percent were the highest in the world. Later, the U.S. government paid for 50-70 % of the country’s total expenditures on research and development from the 1950s through the mid-1990s, usually under the cover of defense spending

3 – Americans are already taxed at far lower rates than other developed nations. This has resulted in miniscule social services and third-world levels of economic inequality. One cause of this situation is the tax code, which taxes ordinary income at up to thirty-five percent. The very rich, however, who receive most of their money from capital gains (“unearned income”), pay only fifteen percent. The situation was very different in the prosperous 1950’s, when they were taxed at up to ninety percent. In other contexts, “unearned income” is known as “welfare.”

As a mythologist, however, I am more interested in what we might call the mythic substrate of beliefs and attitudes that right-wing rhetoric engages so easily. Why are so many so willing to listen? Why, uniquely among nations, are we so stirred by hymns to freedom, riled up by rumors of government excess and enraged by the thought that one’s hard-earned, raised-by-the-bootstrap money might be taxed for some vague sense of the “common good?”

Our story describes a continent that was pure potential, the stuff of dreams. Since, in a European sense, the natives were not using the land productively, it was seen as “virgin” land, implicitly available for defloration and fertilization. As I write in Chapter Seven of my book, Sir Walter Raleigh made the analogy of land, woman and rape very clear: Guiana “hath yet her maydenhead.”

This is our creation myth of the American people, innocently arriving from diverse lands, charged with a holy mission to destroy evil, save souls, carve civilization out of the wilderness – and get rich. Professor R.W.B. Lewis wrote that this story saw the world:

…starting up again under fresh initiative, in a divinely granted second chance for the human race…(Americans were) emancipated from history, happily bereft of ancestry…Adam before the Fall.

The American dream-story was built up over four centuries of preaching, oratory, fiction, poetry, storytelling, popular songs, textbooks, advertisements, films and television. Its essence was that anything was possible.

In this land of opportunity, one’s greatness was limited only by his or her own desires. Americans like to believe in the tabula rasa, the “clean slate.” Even now, we happily consume TV commercials for the military that encourage us to “be all you can be.” The cliché moves us because it rests upon the old notion of human purpose. Americans, however, are constantly told that we can be anything we want to be. This is an adolescent misreading of the indigenous teaching that each person is born to be one thing only, and that the human challenge is to discover what it is.

By the late 18th century, Americans had developed a curious and contradictory mix of traditional Puritanism and modern Enlightenment values. Individuals were fallen and sinful; yet one could make of oneself whatever one might want. Indeed, in 1776 – for the first time in history – a nation proclaimed the “pursuit of happiness” as its primary reason for existence. 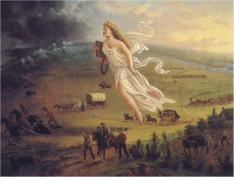 America redefined the word liberty. On the one hand, liberty (from the Latin liber, an epithet of Dionysus, the Greek god of wine and madness) implies release, pointing toward liberation, in both its Marxist and Buddhist meanings. Liberty, however, has a continuum of meanings, including permission to do what one wants, the power to do what one likes and the privilege to “take liberties” with others. The Founding Fathers were apparently unconcerned with the obvious fact that the passionate, unregulated pursuit of liberty by some people inevitably results in the destruction of the rights of others. In practical terms, freedom outside of an ethical framework – freedom without responsibility – becomes license, and it is inseparable from simple criminality. It is also inseparable from unfettered capitalism.

Early white Americans experienced a heady mix of the puritan emphasis on personal salvation and the opportunistic disdain for class distinctions. For three centuries free land in the west served as a safety valve for the discontented; thus abject poverty was relatively uncommon. Most whites (prior to the mass immigrations of the late 19th century), to an extent unimaginable in Europe, became landowners.

But when extremes of wealth and poverty appeared, the rich felt little obligation to the poor. After all, declared Puritanism, poverty was proof of sin. Its belief in predestination survived into the 21st century as a Social Darwinism that has eviscerated the welfare state. And this thinking clearly underlies most libertarian pronouncements. When the poor are concerned, the idea of the tabula rasa recedes into the background.

To be a white American was to have the right to “make something of oneself.” If one failed, he had no one to blame but himself. America, in our myth, became a nation of purposeless, “self-made men,” each individually making his destiny.

But curiously, the nation itself had a unique purpose. The myth proclaimed that God had chosen this people to spread freedom and opportunity. Eventually, Americans extrapolated this idea onto world affairs. The nation of individualists became an individual among nations, shaping other societies to its image of the good life. All empires have rationalized conquest; but only Americans justified enslavement and genocide with myths of freedom, good intentions and manifest destiny. The Bush II administration carried this magical notion to its extreme, but it has always been the core of American policy, and Barack Obama restated it as recently as 2016.

The myth predicted inevitable progress toward the best of all possible worlds. Thus mobility became a major value, and history moved from east to west, allowing one to forget its lessons and continually exist in a “new” America. The ideal American was always moving towards something better; and he tended to look condescendingly upon those who held to the values of place. For those who believe in upwardly mobility, said James Hillman, to be is to be stuck.

The psychological implications are significant. Fifteen to twenty generations of restless Americans have come of age assuming that maturity implies freedom from all restraints, that family and community (and, for many men, all binding relationships) are constraints to be escaped from. Historian James Robertson writes, “The ritual American act of courage is the declaration of independence-rebellion-migration of the American adolescent.”

1 Response to Barry’s Blog # 252: The Mythic Foundations of Libertarianism, Part One of Six