Another characteristic of the paranoid imagination is our obsessive voyeurism. We like to watch, and we especially like to watch our heroes, those who embody our highest ideals, punish our villains – those who invert those ideals. American life, popular culture and politics reveal an endless litany of fascination with the so-called violent and sexually unrestrained behavior of “the Other.” And we seem to like nothing better than seeing the Other suffering for their moral transgressions. I write about the paranoid imagination in much greater detail in Chapter Seven of my book, Madness at the Gates of the City: The Myth of American Innocence.

Archetypal psychology has made us familiar with the concept of the Shadow, that vast range of our unconscious minds that we will not acknowledge. But it also suggests that every curse has a corresponding blessing. Very often, below our traumatic fear and contempt for the Other lies envy, and even deeper below that is the universal drive to achieve authentic psychological integration. This is both the great longing and the worst terror of those millions of white Americans who still carry the formidable burden of our Puritan heritage.

Denying our unacceptable fantasies, we condemn them to the dark regions of the mythological underworld. We identify ourselves and our nation as cultured, hardworking, peaceful, rational, Apollonian and, above all, innocent of all evil intentions. This is white privilege: the willingness to see those desires not in ourselves but in people of color across the world, whom we define as primitive, Dionysian, lazy, dangerously irrational and (this is the core of the projection) unable or unwilling to restrain their impulses, unlike us.

Another fundamental aspect of American Innocence is the myth of progress, which I address in Chapter Nine. We believe that we must keep moving upwards and onwards, or risk re-gressing. But a lifetime of pushing ourselves to conform and achieve has its costs. Hence the universal appeal of periodically – and safely – trans-gressing conventional moral and behavioral standards. We see this theme in the common film trope (think Marx Brothers) of sticking it to our bosses, teachers and social superiors. This is clearly one of the attractions, by the way, of Trumpus rallies (I’ve invented this word to remind myself that Trump serves the myth of innocence by enacting it for all of us, and in that sense, we are all Trump-us).

The terrible personal and cultural strain of repressing one’s emotions and fantasies – of delaying gratification, of tamping down our passions, of pursuing advancement in the relentless rat race of capitalism, of putting up with ignorant managers and sadistic bureaucracies – always threatens to burst out past our internal censors into consciousness and wreak havoc with convention. This is one of the reasons why many traditional societies institutionalized regular periods of carnival, so as to literally blow off the excess steam before it causes an explosive “return of the repressed.” Chapters Four and Ten of my book explore this theme in greater detail.

The body knows all this, and the body understands metaphors and mythic images, even if the mind does not. As Carl Jung wrote, the gods never died; they went underground and resurfaced as illness in the body, in the body politic and in the soul of the world. Dionysus, the god of wine, madness and intensity, constantly lurks at the edges and boundaries of our rational and predictable lives, beckoning us, for our own good, to take an occasional walk on the wild side. But we typically settle only for the minimum, the toxic mimic of the real thing, allowing Dionysus and the other divinities into American life in ways that keep ourselves barely alive yet hungry for real nutrition. Like the mythic Tantalos in Hades, we are tantalized, dimly perceiving the soul’s food almost within reach. But our eating muscles – our capacities for thinking mythologically – have atrophied, even as our need grows. Psychologist Robert Johnson saw this as a defining characteristic of our age:

… we hear a screech of brakes and a crash…Cold chills go up and down our spine; we say, “How awful!” – and run outside to see the accident. This is poor-quality Dionysus…what happens to a basic human drive that has not been lived out for nearly four thousand years.

This need for intensity and ecstasy is both personal and collective. Chapter Ten is an extended discussion of what I call five styles of poor-quality Dionysus. This is how we unconsciously search for what anthropologist Victor Turner  called communitas, the group experience of liminal space, where social and ego boundaries relax and people sense that “everyone’s in this together.” It may occur spontaneously in situations such as shared grief, the funerals of major celebrities, religious pilgrimage, rock concerts, club dancing, sports venues, horror movies and, most recently, political spectacles. It lies behind Marx’s vision of the classless society and other utopias in which men drop their perpetual competition for status. Communitas is the social and ritual space of transformation, when we can potentially drop an immature, outdated or dysfunctional identity and become who we need to be.

A twisted form of communitas also occurs (see below) when we go to war, and when a large-scale environmental disaster or pandemic threatens the entire community.

If there ever was a time in the modern history of our country when we were all in this together, this is the moment. – Bernie Sanders, 3/12/20

If we were honest, we’d admit to a sense of relief and even festivity when disaster hits, because it often brings a refreshing sense of potency, community and purpose. Both the problem and the response become clear. We skip work and speak intimately with neighbors we normally ignore. Something important has grabbed our attention: the opportunity to relax our painfully rigid social boundaries. Dionysus Lusios, the Loosener, has arrived in his non-alcoholic form, getting us drunk with excitement and temporarily unifying us. “I” become we. Something overrules my conditioning against any cooperation that doesn’t serve my personal interests; I’m glad, in more ways than one, to help.

But we cannot institutionalize authentic communitas. We can only discover it, briefly enter it and lose it, because it is a very temporary gift of Dionysus. And, since few of our modern attempts to create it result in significant initiatory change, we endlessly repeat our attempts to achieve ecstasy and turn them into addictions. Whether we find a brief hint of it in church or forget ourselves in a bar fight, the haunting sense of loneliness returns.

Increasingly, we have only second-hand experience of communitas. “To go from a job you don’t like,” writes Michael Ventura, “to watching a screen on which others live more intensely than you… is American life…”  Electronic media have become our immediate environment – not the land, not people, but images of the land and people. For three generations now, tens of millions have retreated from social engagement to spend their evenings alone or with their spouses in front of a television or computer, or in taverns dominated by the ubiquitous TV. And in only one generation, we’ve become all too familiar with the image (in coffeehouses and waiting rooms, on trains, at bus stops) of people staring at their smart phones rather than speaking to each other. But we know intuitively how diminished our lives have become when we hear these words of Rumi: “RUN from everything that’s comfortable and profitable!”

We have set aside certain very specific places to escape this life (perhaps half-life would be more appropriate) for a while. 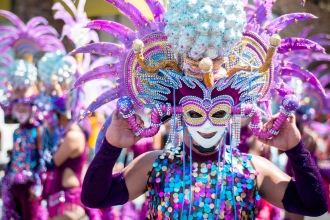 As I wrote here, for nearly 300 years in New Orleans (one of the very few American cities, along with Santa Fe and San Francisco, that were originally settled by Catholics), Mardi Gras has served this function for an America whose value system has never fully allowed the mind to connect joyfully with the body. Because of this dilemma, Protestants in particular are filled with a longing that rarely achieves even temporary satisfaction, except through the brief, communal sense of innocence achieved in fundamentalist religion – and vicarious violence: we like to watch.

But every day, current events present opportunities to take an honest look at what we have allowed our lives to become, to acknowledge that we have hardly begun to understand the catastrophic consequences of our unwillingness to confront our national darkness. James Hillman said:

The more innocence you have, the more violence you constellate. And you can’t get rid of violence by returning to innocence. You just repeat a cycle…These are deep themes of our culture…We came with innocence in mind…But our movements were filled with violence. The earth of the United States is filled with (the) blood of what we killed in order to make it our paradise…Other peoples are always aware of what’s in the soil. But innocence keeps us from even looking at it…From the Greek perspective, what’s in the soil is constantly looking at you…They would call it “blood guilt.”

Part Two of this essay is here.