I have said this before, but I shall say it again and again and again: your boys are not going to be sent into any foreign wars. – Franklin D. Roosevelt, 10/30/1940

In spite of the risk involved, however, in letting the Japanese fire the first shot, we realized that in order to have the full support of the American people it was desirable to make sure that the Japanese were the ones to do this so that there should remain no doubt in anyone’s mind as to who were the aggressors. – Henry Stimson, Secretary of War under Roosevelt

I will never apologize for the United States of America. I don’t care what the facts are.  – George H.W. Bush

This is a dangerous time of increased racism and militarism, demonization of immigrants, surveillance of private citizens and renewed warmongering against Russia. The government is provoking a military coup in Venezuela and threatening once again to attack Iran. Nazis actually march among us — why bother even calling them Neo-Nazis?  So it is important to take another look at both the willingness of politicians and the media to distort the truth as well as our uniquely American, innocent capacity to believe their lies. Myth is what holds it all together.

In 1940, President Franklin Roosevelt was already aiding Great Britain with materials and loans. But he was determined that the United States should fully enter the war in Europe. Why? I’m sure he had a combination of motives, perhaps including these:

1 – Countering Nazi racism and defending its aggression against the “liberal democracies” of Great Britain and France? But both countries were still colonial powers that had no intention of offering any freedom to their African and Asian possessions. Howard Zinn, in Chapter 16 of A People’s History of the United States, shows how the U.S. made it clear to both of them early in the war that it expected to restore their empires. It fought with a segregated army and incarcerated thousands of its own citizens.

2 – Protecting the Jews of Europe? I don’t think so. His government turned away thousands and refused to bomb Auschwitz.

3 – The New Deal economic reforms of the 1930s had been only marginally effective in putting Americans back to work. Millions were questioning both capitalism and the American Dream. Perhaps he reasoned that only military mobilization could pull the country out of the Great Depression.

4 – It was a clash of empires and colonial aggressors. Looking farther ahead, he may have been concerned with other economic/political issues related to American influence in a post-war world, including confronting the Soviet Union and grabbing oil resources in the Middle East. When we discuss history, we are also talking about myth. And in the context of capitalism, as in all of our inquiries, we will have to ask Cui bono? Who profits?

However, since 88% of Americans (down from 95% in the previous year) were still opposed to entering the war, Roosevelt needed to resort to subterfuge. On September 27, 1940 Germany inadvertently gave him a great gift. Hitler made a colossal mistake (second only to his decision to attack the USSR) when he signed a mutual defense treaty with Japan and Italy, promising to defend each other if any one of them was attacked by an outside party.

Roosevelt quickly saw his opportunity. Within two weeks, he set into motion a series of major policies designed to provoke Japan into attacking Pearl Harbor. The notion that he would do such a thing has remained a hugely contentious point of debate among historians, but journalist Robert Stinnett argues:

The latter question was answered in the affirmative on October 30, 2000, when President Bill Clinton signed into law…the National Defense Authorization Act…(which) reverses the findings of nine previous Pearl Harbor investigations and finds that both (Navy and Army commanders) Kimmel and Short were denied crucial military intelligence that tracked the Japanese forces toward Hawaii and obtained by the Roosevelt Administration in the weeks before the attack.

Events quickly fell into alignment after the December 7th attack. 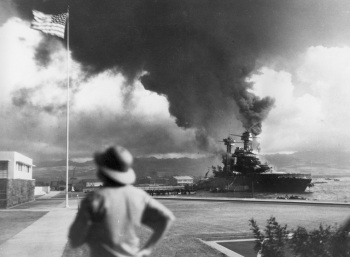 The declaration of war against Japan triggered the Axis mutual defense treaty and forced Germany to declare war on the U.S. Roosevelt now had his European war. His price was a Pacific war. And in a scenario eerily similar to the 9-11 story, he quickly attained enormous public support. Eventually, the conflict became, in Zinn’s words, “the most popular war the United States had ever fought,” with the highest proportion of citizen participation – some 18 million men and women.

In this sense, the story of Pearl Harbor is less about Japan and more about Adolf Hitler. Indeed, it is more about our willingness to consume narratives that reinforce our American sense of innocence, good intentions and unique destiny. The good nation had been attacked by the minions of absolute evil, with no warning, for no reason.

Remember Pearl Harbor became both the war cry of American forces and the excuse to force all Japanese-Americans on the west coast into concentration camps (known in popular culture as internment camps) for the duration of the war. Overnight, these people became the new internal Other. Curiously, the military interned neither Italian-Americans nor German-Americans. Nor did it confine thousands of Japanese-Americans in Hawaii – physically much closer to Japan itself – since they were vital to the economy. It’s difficult to avoid concluding that the shameful treatment of the Japanese-Americans was about racial prejudice and little else.

Americans, once again, were told that they had been attacked for no reason. But this was a mythic motif as old as the nation, indeed much older. Pearl Harbor became the latest and greatest (until 2001) in a long line of iconic events in which Americans were told that they have been attacked without provocation by “the Other” (Indians, slaves, Barbary Pirates, Mexicans, Spanish, Cubans, Germans, Latin Americans, North Koreans, Chinese, North Vietnamese, Lebanese, Grenadians and, eventually, Muslims from a dozen countries).

Stinnett’s book Day of Deceit: The Truth About FDR and Pearl Harbor is an exhaustively-researched study of how Roosevelt provoked the Japanese. It proves conclusively that the U.S. had broken their military codes, knew of the impending attack and deliberately kept the military leadership in Hawaii unaware so as to maximize both the damage and the propaganda value. Stinnett also summarizes a half-century in which “revisionist” (a somewhat derogatory term) historians have argued against the orthodoxy.

But this is clear: the U.S. fought a race war in the Pacific. Mendacious posters of ape-like “Japs” raping white women helped mobilize bellicosity and led to a savagery by American soldiers against the Japanese that they rarely exhibited against the Germans. This behavior resulted from official policy. Years later, Robert McNamara, Defense Secretary during the Viet Nam War, spoke of his time during WW II when he had helped Curtis LeMay plan the firebombing of Tokyo. He admitted, “He, and I’d say I, were behaving as war criminals.”

From the Japanese-American perspective, the war was bounded by two enormous lies. One was the Pearl Harbor narrative and their lost liberties, and the other was the atomic bomb attacks that ended the war. Although most historians and practically all politicians claim to believe that they were necessary, we do have this quote from Supreme Commander in Europe and future President Dwight Eisenhower: “…the Japanese were ready to surrender and it wasn’t necessary to hit them with that awful thing.”

Many scholars now agree that the attacks were meant primarily to threaten the Soviets, that Hiroshima was the opening salvo of the Cold War. Indeed, that city was destroyed (with a uranium weapon) only two days before the Soviets were planning to declare war on Japan, and Nagasaki was hit (with a plutonium bomb) the next day, for no apparent reason. Zinn, however, asks, “Were the dead and irradiated of Nagasaki victims of a scientific experiment?”

By the way, the George H.W. Bush quote at the top of this essay reminds us that the Union Bank controlled by his father Prescott – as well as Ford and General Motors – continued to do business with Hitler long after the U.S. entered the war. Nearly a year after Pearl Harbor, the government finally seized the bank’s assets under the “Trading With the Enemies Act.” But after the war GM had the gall to sue the U.S. for having bombed one of their German factories, and actually collected damages. For much more on the multi-generational crimes of the Bush family, see Family of Secrets, by Russ Baker.

We are talking about history. But to really understand the mythic issues, we have to understand how many of the greatest names in the History profession have served as gatekeepers of the official stories of who we are. In Chapter Seven I write:

The “Dunning School” of racist historians dominated the writing of post-Civil War history well into the 1950s. William Dunning, founder of the American Historical Association, taught Columbia students that blacks were incapable of self-government. Yale’s Ulrich Phillips defended slaveholders and claimed they did much to civilize the slaves. Henry Commager and (Harvard’s) Samuel Morison’s The Growth of the American Republic, read by generations of college freshmen, perpetuated the myth of the plantation and claimed that slaves “suffered less than any other class in the South…The majority…were apparently happy.” Daniel Boorstin’s The Americans: The Colonial Experience doesn’t mention slavery at all. Similarly, Arthur Schlesinger’s Pulitzer Prize-winning The Age of Jackson never mentions the Trail of Tears.

But we are talking here about another one of our most deep-seated narratives about ourselves, how we as a nation never start wars but always come to the aid of deserving people, always with the most altruistic of motives. The nation of extreme individualism is an individual among nations, the exceptional one, chosen by Divine Providence to redeem the entire world. If we were honest with ourselves, most of us would still admit some adherence to this story, of which WW II is our most shining example. And studies have shown (despite popular impressions of the youth revolt of the 1960s) that the more educated we are, the more likely we are to hold such opinions.