Barry’s Blog # 292: We Like to Watch: Being There with Trump, Part One of Seven

…the shameful corruption which lately crept into our politics, and in a handful of years has spread until the pollution has affected some portion of every State and every Territory in the Union. – Mark Twain, 1873

I can hire one half of the working class to kill the other half. – Jay Gould

We Spaniards know a sickness of the heart that only gold can cure. – Hernán Cortés

As summer of 2019 turns into autumn, several items come to my attention.

Item # 1: The San Francisco Chronicle announces that an investment banker and his wife have purchased a 6,400-square-foot, five-bedroom, 7.5-bath “modern Tuscan villa” in nearby Hillsborough for $15 million. Although it was completely renovated in 2013, the new owners “hope to demolish it as soon as possible” to build a mansion twice its size.

How do you react when you read this? With disgust or envy? To some extent, the answer may predict how you voted in 2016. More on that later. First, let’s consider the socio-economic atmosphere that generated it.

The San Francisco / Silicon Valley area is home to at least 75 billionaires, trailing only New York City (103) and Hong Kong (93). However, with a much smaller population, it has the highest density of billionaires in the world, most of them coming out of high tech. One out of every 11,600 people here is a billionaire. The house purchase above is a prime example of what many are calling the “New Gilded Age.”

The original Gilded Age lasted from about 1875 to 1900, when, for the first time in American history, the nation experienced extremely unequal distribution of wealth. A small number of men (some were known as “Robber Barons”) amassed inconceivable large fortunes. Two percent of households owned more than a third of the nation’s wealth, while the top 10% owned three quarters of it. The top one percent (sound familiar?) owned half of all property, while the bottom 40% had no wealth at all. Political corruption was rampant, as business leaders ensured that politicians would not regulate their activities.

Reconstruction in the South was replaced by legal segregation and white supremacist terrorism (sound familiar?) “Nativists” fretted over immigration by “undesirable” aliens. The passage of the 1882 Chinese Exclusion Law marked the first time in history that a country denied entrance to people based exclusively on their country of origin. The 1880s saw seven major white-on-black race riots. William Randolph Hearst introduced the sensationalistic news reporting that came to be called “yellow journalism,” telegraphing to his correspondent in Havana in 1898, “You furnish the pictures, and I’ll furnish the war.”

Wealth had always signified to Americans that its possessors were among God’s chosen, but for 200 years the nation’s democratic ideals and its emphasis on equality had dictated a certain restraint in public display, and its Puritan heritage had kept a lid on the most extreme expression of its predatory instincts. After the Civil War however, America shifted from an agricultural nation to an urban industrial giant. And, like now, it was a simple matter for the wealthy to motivate pundits to sing their praises. As I write in Chapter Eight of my book,

Twisting the idea of natural selection…intellectuals claimed that America’s wealth proved its virtue. Exploitation and elimination of the weak were natural processes, and competition produced the survival of the fittest. The next step was to infer that only the affluent were worthy of survival. They were, of course, merely restating the Calvinist view of poverty as a condition of the spirit…Deeply religious people passionately argued that the suffering of the poor was good because it provoked remorse and repentance…

Class anger was intense, especially among new immigrants who hadn’t yet internalized the mythology of American radical individualism. Millions of others were driven off the land and forced into urban slums, where they received little assistance from government. American industry had the highest rate of accidents in the world, but the U.S. was the only industrial power to have no workman’s compensation program. Between 1880 and 1900, American workers staged nearly 37,000 strikes, including the Great Uprising of 1877, when clashes with police, state militia and federal troops killed over a hundred workers. But in 1888 the Supreme Court affirmed that corporations have all the rights of people and redefined the “common good” as the unregulated manipulation of both humans and the Earth for maximum profit. Sound familiar? The next year, 20,000 railroad workers were injured and 2,000 were killed on the job. The Pullman Strike of 1894 also resulted in over a hundred fatalities.

But Americans had been consuming the mythology of radical individualism and racial privilege for several generations, and media gatekeepers succeeded in distracting many. Horatio Alger’s dime-novel melodramas affirmed the Protestant virtues of frugality, hard work and delayed gratification. Since his young (white, male) heroes “pulled themselves up by their own bootstraps,” you could potentially do the same. His myth of personal success and upward mobility counteracted populist agitation. A decade after his 1899 death, his books were still selling a million copies per year. Library records in Muncie, Indiana showed that five percent of all the books checked out during this period were written by Alger.

A hundred and twenty years later, our assumptions about our likelihood to “get ahead” have taken quite a hit. But the myth of the self-made man is as deeply engrained as our wild, naïve optimism. As recently as the year 2000, 19% of us believed they would “soon” be in the top one percent income bracket, and another 19% thought they already were! Two-thirds expected to have to pay the estate tax one day (only two percent will). Three years later, 56% of those blue-collar men who knew that George W. Bush’s tax cuts favored the rich still supported them.

Americans have twisted in the opposing winds of our paranoid and predatory imaginations for our entire history. The first tells us to deny ourselves, work hard and never succumb to the temptations of the flesh, while the latter tempts us with images of the good life and the nagging suspicion that our acceptance among God’s elite is proven only by our material success. This was and is crazy-making. Historian Greil Marcus writes:

To be an American is to feel the promise as a birthright, and to feel alone and haunted when the promise fails. No failure in America, whether of love or money, is ever simple; it is always a kind of betrayal.

But today we remember the Gilded Age primarily for its images of conspicuous consumption, ostentation and excess. 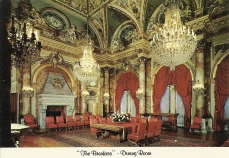 “Social Darwinism” gave the wealthy permission to flaunt their good fortune, or as they saw it, their superior spiritual character. They deserved their wealth, and now they were free to show it off.

In places like Newport, Rhode Island they built gigantic mansions – some with solid gold toilets – for the express purpose of showcasing the unprecedented fortunes accumulated during this new industrial age.

One building, “The Breakers,” had 70 rooms. But the greatest of all was in North Carolina, where the Vanderbilts (who also owned The Breakers) created the Biltmore Estate, with over 135,000 square feet of living space.  More on that later. The Vanderbilt family would build another 15 mega-mansions to advertise their wealth.

6 Responses to Barry’s Blog # 292: We Like to Watch: Being There with Trump, Part One of Seven