The Adams’ are an old New England Yankee family. After attaining a Law degree from Yale (as both his father and grandfather had done before him), Frank Adams signed up to fight fascism in World War Two. He joined the Office of Strategic Services, America’s first national intelligence service. Most of its members came from conservative backgrounds, but quite a few, like Frank, were liberals and true believers in the Franklin Roosevelt’s New Deal.

As a government agency, the OSS was unique in American history. Many of its top leaders were Ivy League graduates, while among its most effective operatives on the ground – and behind enemy lines – were communists and veterans of the Abraham Brigade which had recently fought fascism in Spain. Richard Harris Smith’s book OSS – The Secret History of America’s First Central Intelligence Agency  is a fascinating narrative of how the 11,000 members of its intelligence and sabotage units engaged in many of the unheralded but critical episodes of the war while negotiating bizarre coalitions of right-wing monarchists and left-wing revolutionaries in every country in Europe and the Far East. 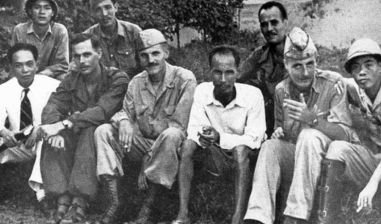 The 2006 film The Good Shepherd  describes the OSS’s idealistic origins and its dark transformation into the criminal CIA.

But all that came later. Frank served honorably, and at war’s end he felt that America was indeed fulfilling its destiny to defend freedom and bring opportunity to the world. There was only one problem – he believed (I will be using this word a lot) in the idea of American exceptionalism, that America always did right, and always for the right reasons, and that even when it didn’t this was because of human mistakes. And he naturally believed in one of its main corollaries, that the Evil Other was determined to subvert America’s ideals, for no reason other than its own depravity.

And in Frank’s time, once Germany and Japan had surrendered, the Other appeared to be the cancer of international communism that threatened democracy everywhere. So, when the O.S.S. transformed into the Central Intelligence Agency, Frank continued his career in covert operations as a willing soldier in America’s anti-communist crusade. For a while, his belief in the CIA’s mission kept him from realizing that it was purging all the liberals and was functioning to destroy popular movements for self-determination everywhere, from Italy, Greece and Iran to Southeast Asia, Africa and Latin America.

In the first decade of the twentieth century, the Zelig family, like millions of others, escaped anti-Semitic pogroms in Eastern Europe and immigrated to America, which they considered the beacon of democracy and freedom. But they never forgot their socialist ideals (honed before the Russian revolution), and they were politically active in their new home, New York City. By social class, ethnicity, politics and their sheer newness, they were the exact opposite of the Adams – but they were also true believers.

As a 15-year-old in 1937, Al Zelig stood on street corners raising money for that same Spanish Republic that so many New York Jewish progressives were fighting for, some of whom would later join Frank Adams’ OSS.

Both progressives and conservatives held the notion of progress, along with freedom, as their highest ideal. As I write in Chapter Nine of my book, Madness at The Gates of the City: The Myth of American Innocence:

…became inseparable from “membership in some collective or community…and from the creation…of a new type of human being.” The religious expectation that had driven men for centuries shifted to socialism’s secular dream without losing intensity. Marx put the golden age at the end of history rather than at the beginning. Communism would be “the solution of the riddle of history.” Its universally compelling appeal had overtones of the Book of Revelation. People everywhere sang the words of The Internationale: “Tis the final conflict.”

In Spain, members of the International Brigades sang it in twenty languages. Spain, like no other time or place in the twentieth century, was a place of possibility, where people crossed borders, sacrificing their futures not for religion or to glorify their fathers, but simply to make a better world. For many, Spain still symbolizes what might have been. And, like any war between brothers, including America’s, the Spanish Civil War evokes the conflict between unreconciled parts of the psyche, for which we may substitute Frank and Al. Neither of them went to Spain, but the shadow of that tragedy hangs over this story.

Years later, Al and his wife joined the American Communist Party, as fully committed to their vision of the future as Frank Adams was to his. Frank’s son Ron, born shortly after the war, spoke Spanish, ironically, as his first language, because he lived his first four years in Peru, where the C.I.A. had stationed his father. Al’s son Danny was born the same year and, like Ron, was a post-war child steeped in his parent’s idealism.

1953 was a critical year for the two families. Both McCarthyism and the Hollywood Blacklist were at their heights. Under the banner of resisting Communism, the American empire was crushing dissent at home and extending itself across the world.

Tehran, Iran, August 19th: Ron Adams, age six, sat in the front seat of a car holding a metal box as his father drove through the city. Ron learned later that it contained thousands of dollars in cash that Frank and his CIA cohorts were distributing to corrupt politicians and thugs. This map shows their whereabouts.

Directed by another OSS alumnus, Kermit Roosevelt, they were in the process of overthrowing Iran’s elected government and installing a brutal monarchy that itself would not be overthrown until the Islamic revolution of 1979.

In the following year, the CIA would overthrow another democratically elected government in Guatemala, leading to decades of civil war and genocide against the Mayan people.

As I write in Chapter Eleven:

Imagine America entering the liminal period of 1953-1955. Imagine it as a time during which the empire reached its apogee (the current madness being merely a last gasp), when the seeds of its collapse first sprouted. The U.S. had a position of security that was unparalleled in human history, with absolute control over the Western Hemisphere and both oceans. Its economy and culture dominated the world. And yet anticommunist hysteria was running wild.

In April 1953, President Eisenhower barred gays from all federal jobs. In June, the government executed Julius and Ethel Rosenberg. The Korean War ended in stalemate in July, just as the Cuban revolution began. In August, the C.I.A. overthrew Iran’s government. Kinsey’s second volume, on female sexuality, appeared in the fall. War of the Worlds left viewers staring fearfully at the stars for signs of the next incursion by The Other, while Shane presented the lone Redemption Hero in his most classic form, literally riding off into the sunset. In December, the first issue of Playboy with nude pictures of Marilyn Monroe arrived.

In May 1954 the French surrendered at Dien Bien Phu (Viet Nam). Ten days later, the Supreme Court made its decision in Brown vs Board of Education, jump-starting the Civil Rights Movement. In June, Congress added the words “under God” to the Pledge of Allegiance, and the C.I.A. overthrew another democracy in Guatemala. Three days later, Viet Nam was divided, marking the official beginning of America’s involvement. In August, as the C.I.A. defeated the insurrection in the Philippines, Congress made membership in the Communist Party a felony.

Consider that last fact: it was now a crime to join a political party in America.

Part Two (of three) of this essay is here.