Barry’s Blog # 320: All Shook Up, the American Dionysus, Part One of Seven

For where there is dance, there also is the Devil.  – St. John Chrysostom

The Greek word xenos means both “stranger” (as in xenophobia) and “guest.” This etymological twist lies at the root of a profound mystery. As Carl Jung taught us, the repressed or marginalized parts of our souls and our culture desire to return home – and they warn of the long-term consequences of not being welcomed back out of the shadows into the light. This is Depth Psychology’s most fundamental insight, and it invites us into the mystery of healing, both personal and collective: unconsciously, those within the pale also long for that moment of completion, because the body understands what the mind represses.

Xenos appears in the fifth century B.C. as the word that the tragic playwrights, especially Euripides

in his play The Bacchae, used to describe Dionysus – the god of wine, of madness, of drumming and ecstatic dance, the ultimate outsider from the mountains, the Other. Throughout Greek myth, Dionysus is contrasted with his rational, heroic half-brother Apollo, 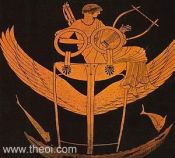 related to the sun, counsellor to Zeus, god of the ruling elites, of calming music, the ultimate insider. Apollo could send healing from the sky, but he could also send death on his heavenly arrows. And unlike Dionysus, he never married.

These ancient stories are neither untruths, in our conventional use of the word “myth,” nor, by being very old, are they irrelevant to modern culture and politics. We are talking about race relations in America.

All white people who take their sense of identity from the myth of American innocence know deep in their bones, below their prejudices and naïve idealisms, that the road to healing involves transforming xenos from stranger to guest. After visiting the United States, Jung observed,

When the (white) American opens a…door in his psychology, there is a dangerous open gap, dropping hundreds of feet…he will then be faced with an Indian or Negro shadow.

Our American narratives – the stories we tell ourselves about ourselves – have inherited the European divorce of consciousness from flesh that began in Biblical times and metastasized in the Protestant Reformation and the industrial revolution. They maximize individualism, conflict, materialism and competition, while minimizing aesthetic, sensual and ecological interrelationships. They speak of a god (with no wife) and his son who love humanity yet remain aloof, except for their furious judgement of our limitations.

Whether they appear to originate in religion, economics, science, nationalism, consumerism or the culture of celebrity, these stories of detached, rational, progressive, productive, masculine, heroic consciousness arise from a mind that has discarded large parts of itself and condemned them to the shadow worlds. Psychologist James Hillman called this thinking Apollonic: “…like its name sake…it kills from a distance (its distance kills).” Claiming objectivity, “it never merges with or ‘marries’ its material…” It defines our “very notion of consciousness itself.”

Since Colonial times, white Americans, like the ancient Athenians they modeled themselves upon, have seen themselves as Apollonian, hardworking, rational, competitive, progressive, individualistic lovers of freedom. Below the dominant stories, however, our Dionysian shadow, the “Other,” appeared in a form the Greeks would have recognized but burdened with a Christian sinfulness that would have been unfamiliar to them.

The descendants of African slaves, in both their stereotyped, earthy physicality and the implied threat of their vengeance, have always been America’s dark incarnation of Dionysus, its collectively repressed memory and imagination. Since, however, whites desperately needed to project him, to see him, they created exactly those conditions – segregation and discrimination – that dehumanized him and fostered behavior that whites could then proceed to demonize without guilt. And their Puritan heritage justified this process by turning the old beliefs about original sin into an explanation of the causes of suffering. One suffered because one deserved to suffer.

The process of projection through which the ego or the dominant elements in a society create their image of the Other is not logical. As with archetypes, when we constellate one pole of a stereotype, we also conjure its opposite. Since whites needed to believe that blacks were slow, dumb and happy, many blacks learned to act that way. Whites created fictional characters – from Jim Crow to Gone With the Wind’s Mammy: loveable and loyal, yet lacking any concern for intellect or freedom.

A second aspect of the Other in the racist mind contradicted the first. Even as many whites perceived blacks as lazy (a terrible offense to our Puritan heritage), they also perceived them as unable to control their desires (an even worse transgression). Again, since whites needed to see their projection of this intensely sexual and aggressive Other in the world, their gatekeepers in business, religion and government created precisely the conditions that would manifest it: a segregated, hierarchical economy, highly limited opportunities for employment, proliferation of both guns and drugs, and a school-to-prison pipeline.

Since the beginning of large-scale (this is to say, mandatory) public education in the 1890’s, all Americans have learned to be unquestioning cogs in capitalism’s machine. And simultaneously, our religious instructors have presented images of both a meek and desexualized Christ and his furiously vengeful father. Quite naturally, the mind desires to revolt against such a diminished imagination. But when such thoughts are unacceptable, they fall back into the personal and collective unconscious. And when opportunistic politicians offer whites such polar-opposite stereotypes of blacks as laziness and aggressiveness, they find fertile – and familiar – soil in the American imagination. As I write in Chapter Four of my book Madness at the Gates of the City: The Myth of American Innocence:

Othering is inconsistent. Europeans projected opposing images upon Jews: “id” figures who would sexually pollute Christian blood, and stingy, “superego” bankers, unwilling to assimilate…Richard Nixon warned of both “the forces of totalitarianism and anarchy…” During the 1991 Supreme Court confirmation hearings for Judge Clarence Thomas, right-wing senators alternatively accused Anita Hill as being either a spurned woman – or a lesbian. Such discourse doesn’t care whether the terms of othering are logical or not. Any demonizing narrative will do.

The psychological truth that fear, hatred and envy are very close to each other is most evident in the gruesome rituals that Southern racists perpetrated for 200 years. In 1966 African American sociologist Calvin Hernton wrote that the image of the black sexual beast was so extreme in their minds that they had to eradicate it, yet so powerful that they worshipped it:

In taking the Black man’s genitals, the hooded men in white are amputating that portion of themselves which they secretly consider vile, filthy, and most of all, inadequate…(they) hope to acquire the grotesque powers they have assigned to the Negro phallus, which they symbolically extol by the act of destroying it.

These attitudes have never characterized only the lower classes. Those being vetted to become their managers and those born into even higher privilege also had to be indoctrinated. It was necessary for everyone’s innate social conscience and human solidarity to be eradicated, and gatekeepers in higher education made sure of this.

William Dunning, founder of the American Historical Association, taught Columbia students that blacks were incapable of self-government. Yale’s Ulrich Phillips claimed that slaveholders did much to civilize the slaves. Henry Commager and (Harvard’s) Samuel Morison’s The Growth of the American Republic, read by generations of college freshmen, claimed that slaves “suffered less than any other class in the South…The majority…were apparently happy.” In 1915 Woodrow Wilson, formerly President of Princeton, showed Birth of a Nation at the White House, giving semi-official sanction to the movies’ first mega-hit. By depicting heroic white men saving young women from their drooling black abductors, it led immediately to the resurgence of the Ku Klux Klan.

In America, the mind/body division coincided with the racial gulf, and this distinction became so sacred, if unnatural, that it required the construction and perpetuation of an elaborate myth of white innocence and national exceptionalism. The Puritan heritage determined that whites were repulsed by the body’s needs and feared that they might be judged by how well they controlled them. Their hatred of the black Other revealed the envy that lay just below the surface, and their unconscious desire to be healed of this deadly burden. Here is a clue to slavery’s appeal that extends beyond economics. This terror, writes journalist Michael Ventura in his brilliant essay Hear That Long Snake Moan, “…was compacted into a tension that gave Western man the need to control every body he found.” In slavery, “the body could be both reviled and controlled.” James Baldwin concluded,

We would never, never allow Negroes to starve, to grow bitter, and to die in ghettos all over the country if we were not driven by some nameless fear that has nothing to do with Negroes…most white people imagine that (what) they can salvage from the storm of life is really, in sum, their innocence.