Watch what we do, not what we say. – John Mitchell, Attorney General under Richard Nixon

Let me be perfectly clear (Nixon said that). I want Biden to win in a landslide, win back the Senate, pick the next few Supreme Court Justices and send Trumpus (Trump = us) out beyond the safety of presidential immunity, where he can get prosecuted for at least some of his crimes. However, for me (in California) and most of you who live in reliably red or blue states, our votes are meaningless. If your passion remains strong, then work for him in the small number of states other than your own that will actually be in play, or work for local progressive candidates.

First, the good news. In many ways this is a time of profound hope. As mythologists, we believe nothing, but we entertain possibilities. White people are reading about privilege and fragility and waking up. Some cities are reducing their police budgets and firing some of their worst racist police officers. Confederate statues are coming down. Sports teams are dropping their racist names. The legal system is recognizing Native American rights and ordering oil pipelines on native land to shut down. The entire oil industry may be collapsing. The next vice president might even be a woman of color! This didn’t happen overnight. As Rebecca Solnit writes, it takes “Decades of Activism That Leads to Historic Change.”

Indeed, when we view these times from a mythological perspective, we see, despite the suffering, much to be excited about.  The combination of the pandemic, the reaction to George Floyd’s murder and cumulative, national disgust with Trumpus have thrown the collective consciousness into such a (welcome) frenzy that, for the first time since late 2001, and perhaps for the first time since the 1960’s, major cracks have begun to appear in the façade of the myth of American innocence.

And the optimism, however, brings its own version of that innocence, as if everything had been fine before Trumpus, as if his removal is assured, as if simply replacing him with Joe Biden would be the answer to all of our problems.

The liberal news media tell us daily how he is falling behind in the battleground states. It’s all good.  One writer goes so far as to predict “a Democratic tsunami.” Another tells us that “Trump is accelerating a political realignment that would have otherwise taken decades.”

Now the bad news: none of them are addressing the elephant in the living room. 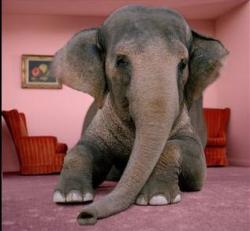 That’s a phrase that is commonly used in addiction recovery, and it seems particularly relevant to use it when reminding ourselves of our national addictions. Of course, from any rational, political-science perspective, the idea that Trumpus seems to be making the wrong decisions on a daily basis, that he’s doing everything possible to alienate voters seems obvious. He almost seems to want to lose (see below) – unless, like four years ago, his people know something we don’t.

Refusal to address this particular elephant is a mythological issue, because all this optimism, all this denial, all this obsession with blaming Trumpus for all of our ills, all this unwillingness to confront deeper issues is happening within the broader context of the myth of American innocence, just as it did then. Indeed, on Election Day 2016, the Cook Political Report (“Democratic tsunami”) predicted the same thing, as did all the major polls. As I wrote in my analysis of the election,

Damn the conventional wisdom. We may well find the answer in pursuing this question: Why, despite the polls favoring Clinton, did the vast majority of high-rolling, last-minute gamblers bet on Trump?…Yes, this was reported in the mainstream media (MSM), but no one seems to have paid it much attention, except for other gamblers. Before you cast the conspiracy theory hood over me (the conventional means of shutting down discussions), shouldn’t we ask what these pros knew?

This election may not go any differently from the 2016 election, and for most of the same reasons that I wrote about in that essay. It’s very likely that Biden will win a large majority of the popular vote, and probably by even greater numbers than Clinton did.

But this is reality: massive purges of voters (a federal judge recently backed Georgia’s purge of more than 100,000 voters); gerrymandering; challenges to the right to vote; voter ID requirements (36 states now have voter ID laws); early/absentee voting restrictions, including cutting hours or days of voting; restrictions on voting registration drives by third-party organizations (such as those enacted in Tennessee that impose civil penalties on canvassers that submit incomplete or inaccurate registration forms); Covid-related fear of in-person voting and budget cuts; likely restrictions on voting by mail; the hesitancy of most states to use ranked-choice voting; a tsunami of polling site closures; and possible defunding of the Postal Service itself (more on that here).

Any combination of these factors could very well give the Republicans another Electoral College victory. For a summary of all this fraud, legal or otherwise, and to read the one person who is most in touch with its reality, follow Greg Palast.

Yes, Biden has a big lead in mid-July. But some polls had Clinton ahead by double digits as late as October 23rd, 2016.  This is not to call polls into question; those polls were probably quite accurate – in that they measured how people expected to vote, and quite likely how they did vote. They did not measure whether those votes were counted accurately. And the fact that the mainstream media has had almost nothing to say about this massive crime can mean only a few things:

1 – In their staunch innocence, they simply don’t believe that American politicians can be so corrupt.

2 – They uniformly chose and continue to choose not to inform the public.

And there’s plenty of speculation about how Trumpus, even if he loses, might try to remain in office.

I don’t have much regard for the Democrats, but there is no doubt whatsoever that the Republican Party is comprised entirely of career criminals, con men and outright sociopaths.

Republican governors and secretaries of state ruthlessly, absolutely control the entire election process, including registration and access to voting, in 26 of the 50 states. These are the people whose operatives actually “count” the votes, and we can assume that they will do everything possible, legal or illegal, to influence the results, exactly as they did four years ago. At least since the 2000 election, the baseline of American democracy has been massive computer fraud. Here is reality, as I wrote (and absolutely nothing has changed):

We can never know how many people went into booths in those states, voted for Clinton on electronic machines, left the building and told a professional poll taker whom they’d voted for, but whose vote, unknown to them, was then flipped…Clinton’s Florida lead in exit polls was 1.3% but she lost by 1.3%, a 2.6% shift. In North Carolina her exit poll margin was 2.1%, but the final vote count showed Trump with a 3.8% lead. She had a 4.4% exit poll lead in Pennsylvania, but she lost by 1.2%, a 5.6% shift. The North Carolina and Pennsylvania shifts – 5.6% – are way outside the margin of error and therefore very unlikely to occur by chance. Altogether, exit polls were conducted in 28 states. In 23 of them the discrepancies between the exit polls and the vote count favored Trump. In 13 of them those discrepancies exceeded the margin of error.

For those who were willing to peek beyond the veil of denial, almost all of these tactics were on full display during this June’s primaries, which Palast has called “Trump’s Vote-Heist Dress Rehearsal.”

…what the press calls the “meltdown” in Georgia (and in the Wisconsin and Kentucky primaries) was very much a dress rehearsal for the plan for minority voting hell in November, not only in Georgia but in a slew of other GOP-controlled swing states…According to an MIT study, a breathtaking 22% of all mail-in ballots are never counted…some states are simply refusing absentee ballots to hundreds of thousands of registrants—or, not sending cards that allow the voter to ask for the mail-in ballot…Georgia is one of the GOP’s ballot-refusing champs. The state refused to send mail-in ballot requests to over a quarter million voters on their so-called “inactive” voter list…In 2018, Georgia purged, that is, erased the registrations of, over half a million citizens on the grounds they’d left Georgia or moved from their home county…(but) 340,134 Georgia “movers” who lost their vote had, in fact, never moved from their registration address.

Trumpus himself has acknowledged that if the system were to be reformed,

The things they had in there were crazy. They had things, levels of voting that if you’d ever agreed to it, you’d never have a Republican elected in this country again.

But before you get on your “blame the GOP for everything” horse, remember to thank the Obama administration for expanding the national security state. We are on a razor’s edge. Russell Dobular writes:

Right now there are still too many functioning vestiges of divided government for Trump to make full use of the terrifying powers we’ve imparted to the state since 9/11, but one major terrorist attack on US soil, or the outbreak of a serious war, and it’s only a short step to indefinite detention for activists and opponents of the regime, many of whom will be the same liberals who cheered the arrest of Julian Assange and want to see Edward Snowden put on trial. And thanks to the Patriot Act, which Congress quietly renewed last week,  as long as the government labels the detainees “terrorists,” it will all be perfectly legal.

So let’s not be naïve. Naiveté, along with overconfidence and deep fear, are the fundamental positions of American myth, and we simply no longer have the luxury of indulging in them.

This culture has vomited Trumpus up to be our symbolic King. But he did not cause any of our problems. He simply embodies them and mirrors them back for all of us. Trumpus is us, and as long as we do not collectively admit that our refusal to confront our racist and violent national character, we deserve him.