Two events in late July and early August of this year (2021) seemed very significant for me. 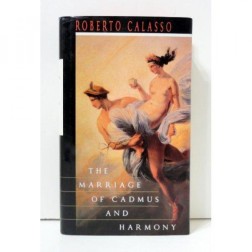 The first, on July 28th, was the death of Roberto Calasso, best known for his 1993 retelling of Greek Myth, The Marriage of Cadmus and Harmony.

It’s a difficult book, and I don’t recommend it for beginners. But in Chapter Three, I find the essence of his argument, and with it I feel a deep sense of the loss all modern people experience, even if we don’t realize it. He tells us that the connection between humans and the Gods has gone through three kinds of relationships.

1 – He calls the first conviviality. In the earliest times, humans knew the gods:

…an age when the gods would sit down alongside mortals, as they did at Cadmus and Harmony’s wedding feast in Thebes. At this point gods and men had no difficulty recognizing each other; sometimes they were even companions in adventure… Relative roles in the cosmos were not disputed, since they had already been assigned; hence gods and men met simply to share some feast before returning each to his own business.

This is how an Eskimo shaman put it a hundred years ago:

In the earliest time,

When both people and animals lived on earth,

A person could become an animal if he wanted to

And an animal could become a human being.

Sometimes they were people and sometimes animals

And there was no difference. All spoke the same language.

That was the time when words were like magic.

The human mind had mysterious powers.

A word spoken by chance might have strange consequences.

It would suddenly come alive

And what people wanted to happen could happen —

All you had to do was say it. Nobody could explain this:

That’s the way it was.

They – ancient, indigenous, tribal, polytheistic, animistic – could tell their stories and imagine their deities without forcing them into literalistic belief systems. James Hillman wrote, “The Gods don’t require my belief for their existence, nor do I require belief for my experience of their existence.” For tribal people, to explain is not a matter of presenting literal facts, but to tell a story, which is judged, writes David Abram, by “…whether it makes sense…to enliven the senses” to multiple levels of meaning.

They told many versions of their stories, because they met the beings from the Other World  in specific places. Place was critical, even if time wasn’t: “This happened here, once upon a time…” There was an Aphrodite of this place, and another of that place. So stories emerged from those places, and the different versions or variants of any myth had equal value. Calasso writes, “No sooner have you grabbed hold of it than myth opens out into a fan of a thousand segments.”

Their gods were amoral. They did not set out required modes of moral or ascetic behavior. There was no end game in which humans might attain their status, reach Heaven or be redeemed. However, they did want to be entertained, and, writes Calasso, “…to be recognized.”

…the way they imposed themselves was first and foremost aesthetic…More than acts of worship, it was beauty that offered a firm link between the life of the city and that of the Olympians. Mortals and immortals communicated through beauty, without any need for ceremonies.

Later on, humans made the connection through story and ritual. As the Mayan shamans say, they fed them through sacrifice. This was a world of reciprocal relations, in which the inhabitants of each of the two worlds gave and received. Our ancestors fed them with beauty, and (according to Mayan shaman Martín Prechtel)  with their tears. That is to say, the choice cuts of sacrificed animals they offered represented their deepest truths, emotions and potentials. In this imagination, the gods wanted humans to recognize the gifts they came into the world with, and to give them to the world.

In return, they would sometimes answer prayers and intercede in human events. It was a world in which humans gathered in great public festivals to honor the gods. In Classical Greece, writes Alexandra Kandanou,

It was during the Golden Age of the Athenian democracy that Eleusis, with its Mysteries, reached its utmost splendor. It was a huge, collective event. Participants shared a highly spiritual experience. It included different stages of emotional tension, frenzy and relief that would solidly bond their sense of identity as well as their sense of communion. Holding together a whole society, the Mysteries were there to make life livable. Eleusis is clearly not only a place of worship for the Greeks, but for humanity itself, a place where humans perform a ritual in deep connection with Nature…The goal of this form of spirituality…is about realizing happiness rather than redemption and salvation. “Happy is he who has seen these things before leaving this world: he realizes the beginning and the end of life, as ordained by Zeus”, writes Pindar.

The animistic world was full of the spirits of place: Nymphs, Naiads, Corybants, Dactyls and countless others. Two of the Greek gods who served as mediators between their world and ours were Hermes  and his son Pan, who expressed nature as an independent, living, animistic force of generativity. But nature deprived of that connection becomes a very scary place.

2 – Among Cadmus’ many accomplishments was his invention of the alphabet. With it, the Greeks began to experience the gods “in the silence of the mind”, writes Calasso, “and no longer in the full and normal presence…”

After that remote time,

…when gods and men and been on familiar terms, to invite the gods to one’s house became the most dangerous thing one could do, a source of wrongs and curses, a sign of the now irretrievable malaise in relations between Heaven and Earth.

Tantalus invited the gods for a banquet and served his murdered son to them in a stew, setting off a multi-generational curse. A later marriage, between the mortal Peleus and the goddess Thetis, led to the Judgment of Paris, the Trojan War and the deaths of thousands.

For more reasons than we can count, humans separated from the divine, and no longer performed such sacrifices. James Hillman wrote:

A cry went out through late antiquity: “Great Pan is dead!”…nature had become deprived of its creative voice. It was no longer an independent living force of generativity. What had had soul lost it: or lost was the psychic connection with nature…They had lost their light and fell easily to asceticism, following sheepishly without instinctual rebellion their new shepherd, Christ, with his new means of management. Nature no longer spoke to us – or we could no longer hear…Pan the mediator, like an ether who invisibly enveloped all natural things with personal meaning, with brightness, had vanished… When Pan is alive then nature is too, so the owl’s hoot is Athena and the mollusk on the shore is Aphrodite… When Pan is dead, then nature can be controlled by the will of the new God, man, modeled in the image of Prometheus or Hercules, creating from it and polluting in it without a troubled conscious…As the human loses personal connection with a personified nature and personified instinct, the image of Pan and the image of the devil merge.

Anticipating the advent of Christianity, humans had begun to lose the capacity for symbolic thinking and were replacing it with rigid, codified systems of belief. Now the Gods could only make themselves known by intruding into the human world. But because people no longer recognized them, they perceived such intrusions as violent, unnecessary and unwanted, rather than as invitations. In the classic stories, this is a polarized, highly gendered world, and people perceived such intrusions, literal or not, as rape. In this period, wrote Calasso,

…The image of rape establishes the canonical relationship the divine now has with a world…contact is still possible, but it is no longer the contact of a shared meal; rather it is the sudden, obsessive invasion that plucks away the flower of thought.

With deep apology to actual rape victims, I ask you to momentarily step back from the literal implications of the word rape and consider (“to be with the stars”) its etymology: “seize prey; abduct, take and carry off by force”. It is related to rapid, ravenous and raptor, the bird that seizes its prey and flies off. Going further, however, we find other words: rapt (“carried away in an ecstatic trance”) and, most notably, rapture (“spiritual ecstasy, state of mental transport…exalted or passionate feeling in words or music”). The connecting notion is a sudden or violent taking and carrying away.

In this phase, a god might not be recognized, wrote Calasso:

As a result the god had to assume the role…of the Unknown Guest, the Stranger. One day the sons of Lycaon, king of Arcadia, invited to their table an unknown laborer who was in fact Zeus. Eager to know whether they were speaking to a real god, they sacrificed a child and mixed his flesh with that of the sacred victims, thinking that if the stranger was a god he would discover what they had done. Furious, Zeus pushed over the table…After that banquet, Zeus made only rare appearances as the Unknown Guest. The role passed, for the most part, to other gods. Now, when Zeus chose to tread the earth, his usual manifestation was through rape. This is the sign of the overwhelming power of the divine, of the residual capacity of distant gods to invade mortal minds and bodies. Rape is at once possessing and possession. With the old convivial familiarity between god and man lost, with ceremonial contact through sacrifice impoverished, man’s soul was left exposed to a gusting violence, an amorous persecution…Such are the stories of which mythology is woven: they tell how mortal mind and body are still subject to the divine, even when they are no longer seeking it out, even when the ritual approaches to the divine have become confused.

When men lost interest in the gods, they also began to lose interest in each other. The Greeks knew the stranger as xenos, from which we get xenophobia, or fear of the stranger. Hillman reminded us that Pan is the root of the word panic: “…nature alive means Pan, and panic flings open a door into this reality.”

With the old mesocosmic framework no longer available to us, an unfiltered look into reality quite naturally results in panic. And in 2021 we can’t ignore the other meaning of pan as a prefix: “all, every, whole, all-inclusive,” as in panorama, pandemonium – and pandemic.

Again, we need to get past the literal implications. If, in this second type of relationship, the only way the gods can enter our world – to get our attention – is through the violent emotional interruptions and penetrations that we sometimes interpret as rape, or as Carl Jung said, “…phobias, obsessions, and..neurotic symptoms”, then this still means that they may want something from us. They still want to be fed. And it’s even possible to imagine that they still care about us. It’s a dangerous world, but it does carry some potential, some vestigial memory of early and happier times, whether we refer to those times as Edenic or as a Golden Age.  The Greek imagination understood this: xenos also meant “guest.”