In times like this I think of Sam Cooke’s great 1960 recording of “Chain Gang.”  I am always overwhelmed with deep feelings.

Then I notice a whole train of associations. First, the singer himself: possibly the sweetest, most soulful voice of the twentieth century, a great talent who was snuffed out at age 34.

Then I think of the terrible image of the chain gang itself, that astonishingly brutal system used throughout the South to punish rebellious Black men from the 1870s to the 1950s as part of the “Jim Crow” system of racial oppression.

It perpetuated African-American servitude once the Thirteenth Amendment to the Constitution ended slavery outside of the context of punishment for a crime.

A chain gang was a group – sometimes a very long chain – of prisoners chained together at the ankles to perform “hard labor” such as repairing buildings, building roads, clearing land or even intrinsically pointless tasks (think “cruel and unusual punishment”) such as breaking up rocks to form gravel.

Falls could imperil several individuals at once. The effort required to avoid tripping while in leg irons was known as the convict shuffle. Convicts? Local police arrested very large numbers of these men for minor offenses, including “vagrancy,” and then contracted out their labor to private interests. 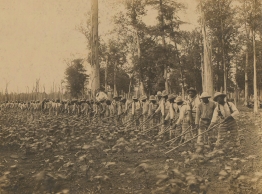 Some of the chains used in the Georgia system weighed 20 pounds. Prisoners suffered from ulcers and gangrene where the metal ground against their skin. Protests resulted in the end of system by the mid-1950s.

But then I remember – don’t you know? – that during the1990s a few states reintroduced it.

Although lawsuits soon forced most of them to backtrack, the notorious Sheriff Joe Arpaio retained it in Arizona. Indeed, as recently as 2013, Arizona still had female chain gangs.

The women were chained together at the ankles and carried out tasks such as weeding at the sides of highways and burying unclaimed bodies at a cemetery.

All this was happening before Donald Trump shamelessly instituted the cruel practices of separating Latino children from their parents and crowding them into cages. As I write in Chapter Ten of my book, this is how America continues to cling to its innocence: by scapegoating the Other, as minorities, as children, and most savagely, as the children of minorities.

You cannot lynch me and keep me in ghettos without becoming something monstrous yourselves. And, furthermore, you give me a terrifying advantage. You never had to look at me. I had to look at you. I know more about you than you know about me. Not everything that is faced can be changed, but nothing can be changed until it is faced. – James Baldwin

Our society continues to brutalize people of color through a police system that lacks all accountability. In the six months after Trayvon Martin was killed, police murdered over eighty African Americans. Kali Akuno of the Malcolm X Grassroots Movement writes:

As we dug deeper, and more grieving family members came forward, we found that every 36 hours…another Black child, man or woman dies at the hands of the police, security guards or self-appointed vigilantes.

Eighty percent of the victims are unarmed. In 2012, police in the U.S. killed over a thousand people. They were responsible for 10% of firearm-related homicides, and they injured (to the point of hospitalization) nearly 55,000 others.  Very few were punished. As I write here (Do Black Lives Really Matter?):

So here, sadly, is the ultimate answer to the question of Black lives mattering: of course they matter, in the value they offer to this upsurge of hatred. Every time a cop kills an unarmed Black person – especially when the crime is recorded – and goes unpunished, the message goes out to the haters (those who hate themselves so profoundly that they must transfer that hate onto the Other) that they, the haters, can go out and do something similar without fear of reprisal or punishment. Representatives of the National Security State, from local courtrooms to the White House, will protect them.

But the prison-industrial complex has determined that black lives are more valuable live than dead. As always, we follow the money. Cui Bono?

Sam Cooke wanted us to pay attention, and having done that, to drop some of our innocence. Listen again to the song. Just before he sings the refrain, “That’s the sound of the men working on the chain gang…”, the bass man of his backup group sings, “Well don’t you know…” Musically, this is a statement that links the refrain to the stanzas, but it is much more than that. It is in fact a challenge to the listener: Are you asleep? Don’t you know what has been going on? Your soul, your moral well-being, your nation, your children all depend on this, on rising out of your ignorance, on becoming “woke.” You can no longer, says the bass man, pretend to be unaware of what the agents of authority claim to be doing in your name in order to maintain your own sense of innocence.

These innocent people are trapped in a history they do not understand, and until they understand it, they cannot be released from it. – James Baldwin

I realize this essay is beginning to sound preachy (perhaps to honor Sam’s and James’ origins in the church), but I can’t help but think that there’s going to be a reckoning. Is there such a thing as national karma? Will our descendants suffer for our sins?

Then it occurs to me: aren’t we already living in the reckoning time? Aren’t almost all of us experiencing a diminished, de-mythologized, de-potentiated life, swinging between the unsatisfying harbors of addictions, fundamentalism, media-driven consumerism, violent patriotism and – most of all – fear of the Other (as Muslim terrorists, immigrants or black men)?

I have always been struck, in America, by an emotional poverty so bottomless and a terror of human life, of human touch, so deep, that virtually no American appears to be able to achieve any visible, organic connection between his public stance and his private life…This failure of the private life has always had the most devastating effect on American public conduct, and on black-white relations. If Americans were not so terrified of their private selves, they never would have become so dependent on what they call ‘the Negro problem’. This problem, which they invented in order to safeguard their purity, has made of them criminals and monsters, and it is destroying them; and this not from anything blacks may or may not be doing but because of the role a guilty and constricted white imagination has assigned to the blacks. – James Baldwin

Then again, I don’t know if Sam could allow himself to fall into despair. His very last recording was A Change Is Gonna Come. It was released at a very significant moment, in December 1963, four months after Martin Luther King’s “I Have A Dream” speech, just after the Kennedy assassination, and two months before the arrival of the Beatles. A year later he was dead.

Earlier, in January of that year, Sam had recorded a live album – “One Night Stand! Live at the Harlem Square Club, 1963” – on which he sang “Chain Gang” with an upbeat, danceable, celebratory rhythm to a wildly appreciatory, sing along crowd that was almost certainly exclusively black. What was going on in that room? How could they seem to be enjoying such a sad song?

This event was a ritual, and the high priest was leading the assembly in the multi-generational confession of extreme pain and grief that, once expressed – and received, in community – turns into its opposite, where the “Ooh! Aah!” has a very different meaning. This is the secret of the Blues, something all indigenous people know, that – in community – one can reach profound, even ecstatic levels of unity once all aspects of the truth, especially the dark aspects, have been brought into the light.

Here are some other essays of mine on the subject of race in America;

Hands up, Don’t Shoot: The Sacrifice of American Dionysus

Did the South Win the Civil War?