Some very fine people on both sides. – D. Trump

The Parkland, Florida shootings have kindled a long-awaited national movement for gun control. USA Today asked: “What has been so different from all the other mass shootings over the years?” That phrase – all the other mass shootings – indicates another kind of normalization. But many Black, Red and Brown Americans have asked whether it took a massacre of primarily white students to promote the issue to permanent awareness. Violence perpetrated by agents of the State against people of color, they point out, is hundreds of years old. Enter any room with several African Americans, mention this new normal and watch them role their eyeballs.

Lately we’ve seen countless attempts to understand Trump supporters (those who first normalized him) as being motivated primarily by economic insecurity. There’s plenty of evidence, however, that the real issue, as always, was and is race. These may be honest attempts to see things from all angles. But they are subtle indications of white privilege, and they slide easily into more false equivalencies, yet another way in which the gatekeepers do their normalization work. Hsu writes:

…in the rush to be radically empathetic, and reckon with another’s disaffection, a different kind of normalization occurs: We validate an identity politics that is often rooted in denying other people’s right to the same…What we think of as normal shapes our field of vision; it tells a story of the world and its possibilities. Racism, sexism, and the other hatreds and phobias lately on display didn’t become normalized this year. They’ve always been normal—for some of us.

As I wrote in Chapter Seven of my book,

Freedom became a holy term that meant all things to all people. Liberty (from a Roman epithet for Dionysus, Liber) implies release – the return of the repressed – and liberation, in both its Marxist and Buddhist meanings. Americans struggled for a while with the difference between positive liberty (the power and resources to act to fulfill one’s own potential), and negative liberty (freedom from restraint, what one didn’t have to do). Eventually, the two forms of liberty birthed a monster: freedom became entitlement to do what one wants, regardless of the needs of the community, the power to achieve it and the privilege to take liberties with others (“to liberate” is military slang for looting). This interpretation of the pursuit of happiness led eventually to the liberties extended to non-human entities – corporations…The Enlightenment and the commercial revolution offered freedom without responsibility, but it had unexpected results, writes Historian John Hope Franklin. The passionate pursuit of liberty by some resulted in the “destruction of the rights of others to pursue the same ends…the freedom to destroy freedom.”

Domestic normalization of violence exactly mirrors the public’s acceptance of a permanent war economy and permanent war in the Middle East. There is a direct relationship between Parkland and Palestine. Only those of us who are still swimming in the pool of American innocence can think of this as new.

From the point of view of Black, Red and Brown Americans – the Others – the whole subject of the normalization of Trump is a small part of a much larger picture: the denial – by politicians, theologians, journalists, pundits and even psychologists – of our mad culture. But three years after the attacks on 9/11 that changed everything, at least for white people, the Black novelist Walter Mosely wrote, “I have never met an African-American who was surprised by the attack on the World Trade Center.”

Liberals, fondly (and innocently) remembering Barack Obama, have endured a year and a half quite justifiably horrified at the idea of Trump as president. This reaction, however, has birthed several other narratives, including the one claiming that “the Russians” hacked the election. Regardless of whether it is true or not, it has revived the oldest and nastiest of American traditions – the witch hunt, and this time from the “left.”

And it has served to distract millions from several much more influential factors in Hillary Clinton’s defeat. It has normalized her, her incompetent campaign, her warmongering history and (in case you haven’t noticed), the Democratic Party’s increased marginalization of its progressive wing. That marginalization has effectively supported the normalization of international violence. Daniel Lazare writes:

Rarely has war fever in Washington been deeper and more broad-based.  Everybody’s jumping on board – liberals and conservatives, Republicans and Democrats, human-rights advocates and neoconservatives. With the 2018 midterms fast approaching, it seems that the only choice voters will have is between a military conflict from column A and one from column B.  Which will it be – the clash with Putin that liberals are talking themselves into? Or the showdown with Iran that (John) Bolton has long advocated?…It’s a choice between cyanide and arsenic. One moment, Trump is threatening “Little Rocket Man” Kim Jong Un with “fire and fury” while, in the next, the New York Times is demanding that he take off the gloves with regard to the Kremlin. The title of a Times editorial on Friday, March 15, said it all: “Finally, Trump Has Something Bad to Say About Russia.”

Here, gatekeeping is inseparable from normalization. The voice of the calm, reasonable, liberal center is literally taunting a man who is almost universally acknowledged as unstable and insecure about his masculinity with not being aggressive enough against a nuclear power! And yet even the NYT, in a rare 2008 moment of actual objectivity, acknowledged the constant presence of war hawks in the media:

…a campaign to generate favorable news coverage of the (G. W. Bush) administration’s wartime performance…members of a familiar fraternity, presented tens of thousands of times (my italics) on television and radio as “military analysts” whose long service has equipped them to give authoritative and unfettered judgments about the most pressing issues…

So: why normalize the abnormal? Clearly, many players, from the Kochs and Mercers to Big Finance and Big Pharma to the NRA and the military, were highly motivated to support Trump and have done quite well under his administration. But all of them had prospered under Obama, and they all would have done so under Hillary Clinton.

Perhaps those who had the most to gain, however, were the fundamentalists. Chancey De Vega writes:

In all, it is increasingly clear that with Trump as the figurehead and Vice President Mike Pence as the puppet-master, Christian evangelicals have successfully completed a soft coup in America.

Andrew Whitehead, co-author of a new study of this issue, writes that Trump is

…a tool used by the Christian God to make America Christian again. He can be dispensed with when he is no longer useful.

“Useful tool” is another euphemism, this time for “useful idiot,” a term first allegedly coined by Lenin, who said in a very different context that capitalist dupes “will sell us the rope with which to hang them.” Such luminaries as Madeleine Albright, former CIA Directors Michael Morell and Michael Hayden and Steve Bannon have all applied the term to Trump. 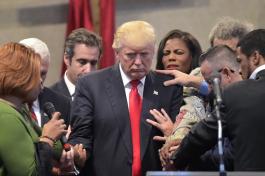 But, to repeat, he has served all their agendas well. Only the fundamentalists would have failed to prosper under Clinton, so they win the prize for now.

But I must remind you that this essay is not really about politics, except to the extent that politics reflects mythology. Ultimately, the reason why the mainstream media have and will continue to normalize Trump is the same as why – eventually – they normalize every president.

Regardless of his documented crimes and personal failings, any man who assumes the presidency automatically takes on the public’s projection of the Sacred King (whether positive or negative), regardless of whether large numbers of us consider their elections to have been fraudulent. At the level of image, metaphor and deep narrative, these men are the nation because they embody it, and the nation must endure.

Why must the nation endure? In a demythologized world in which myth and ritual have declined, they are replaced by consumerism, fundamentalism, substance abuse – and nationalism, in which the individual identifies completely with the state, and is willing to sacrifice its young to its aims. No nation, no sacrifice, no individual.

For the sense of “nation,” with all its white privilege, economic disparities, imperial influence and permanent warfare, to endure, the media must continually try to shore up each new crack in the veneer of American innocence. So rehabilitating really terrible people is another function of the gatekeepers. Rebecca Gordon writes:

George W. Bush is hardly the first disgraced Republican president and war criminal to worm his way back into American esteem. Richard Nixon remains the leader in that department. He spent his later years being celebrated as an elder statesman…few even remembered that his was the first administration in which both the president and vice president resigned.

Ronald Reagan is now remembered by friend and foe alike as a kind, folksy president…When he died in June 2004, the New York Times was typical in the largely fawning obituary it ran, describing him as “the man who restored popular faith in the presidency and the American government.”

We respond to images, metaphors and narratives more than to logic. George Lakoff recalls Reagan being interviewed by that same Lesley Stahl, who was attacking everything he was doing as President.

The next day, she got a call from Reagan’s chief of staff, saying, thank you for this wonderful interview. And she said, but I was attacking Reagan. He said, it didn’t matter, if you turned off the sound he looked wonderful…And this is the same thing with Trump. So if you have a station where people are constantly sitting around analyzing Trump, some attacking him, some defending him, etc., that’s normalization. When you negate something, you’re activating it.

Nixon had to wait many years for his rehabilitation and Reagan’s was largely posthumous. At a vigorous 71, however, Bush seems to be slipping effortlessly back onto the national stage only nine years after leaving office essentially in disgrace…Articles in the New York Times, the Washington Post, and even the Guardian eagerly reported Bush’s implicit criticisms of the president as a hopeful sign of resistance to Trumpism from the “responsible” Republican right.

The New Narrative: If the contrast with Trump now informs us that these men were not so evil, then it becomes easier for the whole nation to sink back into its default mode of innocence. Maybe, we tell ourselves, maybe we aren’t so terrible. And Trump in turn has normalized – given permission to – some of the darkest aspects of human nature to show themselves to us.

In a March 2018 poll, Trump’s popularity increased by seven points, even before he attacked Syria. To paraphrase Franklin D. Roosevelt, he may be an SOB, but now he’s our SOB.